The PhD defence of Mario Vretenar will take place (partly) online and can be followed by a live stream.
Live Stream

Mario Vretenar is a PhD student in the department Adaptieve Quantum Optica. Supervisor is prof.dr. P.W.H. Pinkse and co-supervisor is dr. J.A. Klärs from the faculty of Science & Technology. 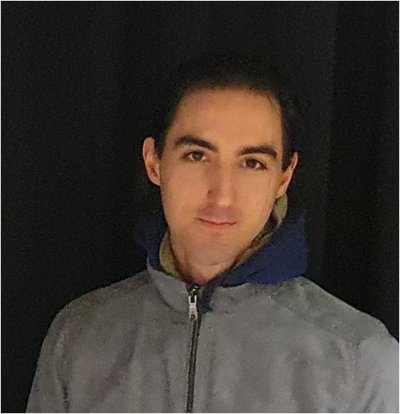 Bose-Einstein condensation (BEC) is the massive occupation of a single quantum state in a gas of bosons at a finite temperature and is one of the few phenomena demonstrating quantum behaviour at the macroscopic scale. A common Bose gas, thermal photons as emitted by a blackbody radiator, however, does not exhibit Bose-Einstein condensation. This is due to the fact that the photon number is not a conserved quantity for blackbody radiation and at low temperatures photons are lost in the walls instead of condensing into the lowest-energy mode of the blackbody (vanishing chemical potential). In quantum confined structures such as optical microcavities, however, the situation is different. Here photons can thermalise to the temperature of the optical medium through repeated absorption and emission cycles while the chemical photon potential remains non-zero, allowing for an independent tuning of temperature and particle number. In such systems, photons are indeed observed to show Bose-Einstein condensation. Furthermore, the critical particle number for such a system can be as low as 10 photons at room temperature, making photon Bose-Einstein condensates experimentally easily accessible.

In an optical microcavity, photons behave like massive 2-dimensional particles confined in a potential defined by the mirror geometry and the optical medium refractive index. Controlling this potential is essential for exploring the physics of the condensation process, and can be experimentally done in a number of ways. In this thesis, we develop, characterise and employ a number of flexible methods. Arbitrary potentials are realised with the help of modified dielectric mirrors that have an additional optically absorptive silicon layer between the substrate and the dielectric stack. This layer allows us to locally heat the mirror using laser light, and is the basis of our methods. The first is the permanent nanostructuring, resulting from argon bubble formation inside the dielectric stack layers. Fast thermal annealing redistributes the argon gas originally trapped in the amorphous structure during their production, locally reducing the density of the material and thus pushing the dielectric stack upwards resulting in a modified surface mirror profile, without noticeable effect on the mirror reflectivity. We show the potential of this method by constructing complex structures. The second method involves thermal expansion through laser heating which can locally alter the surface mirror profile in a reversible fashion. The last method is achieved by introducing a thermoresponsive polymer into the optical medium, where local temperature increase may in turn significantly increase the refractive index, thus lowering the potential.

Using these methods, we experimentally investigate Bose-Einstein condensation under non-equilibrium conditions in potentials resembling a Mach-Zehnder interferometer. The switching behaviour of the interferometer in various configurations deviates from what is typically expected, and thus provides insight into the formation process of the condensate. We show that by adjusting their frequency, Bose-Einstein condensates naturally try to avoid particle loss and destructive interference in their environment. Understanding the physical mechanisms that determine the state of a condensate under controlled dissipation and feedback is essential for exploring the physics of analog simulators for classical spin models, which is the long-term goal of our activities.

As a first step towards the realisation of such an analog simulator, an optical analogue of a 0,pi Josephson junction is implemented and characterised. Our experiments show a high degree of control over the junction state, which is essential for spin-glass simulation. As a first step towards a larger system, we implement a coupled 4-condensate system and show that it remains highly coherent. We furthermore perform numerical simulations on larger lattices, with promising results.

In further work, we investigate alternative types of condensate couplings and their possible implementations. In particular, we show that couplings can range from dispersive to dissipative. Dissipative couplers are expected to have superior properties for analog spin-glass simulation and are, therefore, of particular interest for us. We show that the loss channel in dissipative couplings may be realised by drilling holes using focused ion beam milling.

In short, in this thesis we develop a number of tools essential for a high degree of control in photon Bose-Einstein condensates. We investigate the gain-dissipative nature of non-equilibrium photon condensates, and perform first steps towards the realisation of optical spin-glass simulators.

Mario Vretenar is a PhD student in the department Adaptieve Quantum Optica. Supervisor is prof.dr. P.W.H. Pinkse and co-supervisor is dr. J.A. Klärs from the faculty of Science & Technology.