Due to the COVID-19 crisis the PhD defence of Mozhgan Moradzaman will take place online (until further notice).

Mozhgan Moradzaman is a PhD student in the research group Photocatalytic Synthesis (PCS). Her supervisor is prof.dr. G. Mul from the Faculty of Science and Techology (S&T). 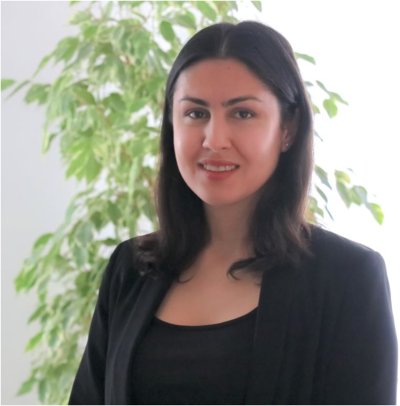 In chapter 3, we investigated the influence of CO2 partial pressure on the catalytic performance of the oxide-derived copper electrodes in electrochemical reduction reaction. We observed that the faradaic efficiency of ethylene increased from 37% to 45% as result of decreasing the CO2 partial pressure from 1 to 0.4 atm.

In chapter 4, we studied electrochemical reduction of various CO/CO2 mixtures on rough Cu electrodes. We discovered that the highest ethylene faradaic efficiency was obtained at CO2 partial pressure of 0.6 atm (CO partial pressure of 0.4 atm). Besides, we studied effect of CO partial pressure on electrochemical CO reduction and concluded that ethylene faradaic efficiency was linearly related to CO partial pressure. Next, we investigated the effect of anion composition of the electrolyte on the product distribution of electrochemical CO reduction. Highest ethylene and lowest methane formation was observed in KOH with the pH of 13, while in phosphate buffer at pH of 4.6 the opposite was found. Finally, in-situ ATR-SEIRAS was employed to help understand the effect of electrolyte anion on Cu surfaces. The results suggested that the CO coverage is enhanced as the pH is increased and proton concentration is decreased. At high CO coverage on the surface, C-C coupling is favored and ethylene formation is significantly improved.

In chapter 5, we employed ATR-FTIR spectroscopy to investigate electrochemical conversion of CO2 on a rough Cu electrode fabricated via sputtering. We observed surface-adsorbed species of formate, carbonate, CO and bicarbonate, respectively, as more negative potentials were applied. Besides, we were able to detect CO2 dimer radical anion, the first and most frequently cited intermediate in CO2RR.

In chapter 6, we investigated the origin of ethylene selectivity on rough Cu electrodes. We employed in-situ electrodeposition technique to form rough Cu structures and observed enhanced ethylene formation while formation of methane and hydrogen were suppressed. Based on in-situ Raman spectroscopy, we concluded that on rough Cu electrodes, significantly increased CO coverage lead to high rate of CO coupling, and consequently shifted the selectivity toward ethylene. Moreover, we believe that high content of Cu hydroxide on the smooth electrode surface plays a role in inhibiting ethylene formation.

Finally, in chapter 7, we employed Raman spectroscopy and isotopic labeling to identify key intermediates and oxidation state of Cu. We were able to identify carbonates, bicarbonates and CO and their potential dependence. One of the more significant findings to emerge from this study was the presence of Cu oxides and hydroxides at highly negative potentials. Future experimental and theoretical work is needed to comprehend the role of such Cu+ species as catalytically active sites for CO2RR.

Due to the COVID-19 crisis the PhD defence of Mozhgan Moradzaman will take place online (until further notice).