Due to the COVID-19 crisis measures the PhD defence of Johan Damveld will take place (partly) online in the presence of an invited audience.

Johan Damveld is a PhD student in the research group Marine and Fluvial Systems (MFS). His supervisor is prof.dr. S.J.M.H. Hulscher from the Faculty of Engineering Technology (ET). 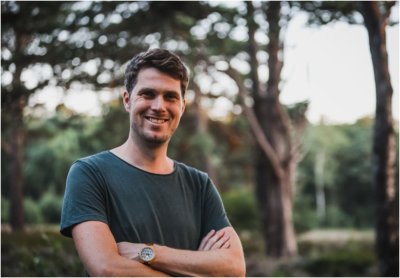 The sandy seabed of shallow coastal shelf seas displays fascinating morphological features of various dimensions. At the same time, the seabed also harbours a rich ecosystem. It is well established that benthic community composition is related to various abiotic variables, such as sediment type and grain size. However, less is known about how macrobenthic species relate to morphological bed patterns, and in particular to tidal sand waves. Increasing pressure from offshore human activities makes it necessary to further study the drivers of benthic community distributions over sand waves. Moreover, a greater understanding of the effects of benthic organisms on hydrodynamics and sediment transport processes over sand waves may improve morphological model predictions. Therefore, the aim of this thesis is stated as follows: to determine and understand the feedbacks among tidal sand waves, benthic organisms and sediment sorting processes. To this end, a combination of field observations and process-based modelling techniques were used in this thesis.

Chapter 2 presents a field expedition to the North Sea where camera transects are performed over two sand waves. This revealed that organisms living on top of the seabed and within (determined by counting seabed holes) are significantly more present in the troughs of sand waves, compared to the crests. In addition, the ripple features found on the sand wave crests are more abundant and more regular, and have longer wavelengths than those in the troughs.

To understand the driving mechanisms behind these field observations on organisms and sand waves, two different process-based models are developed, one focussing on small-amplitude sand wave dynamics and the other on finite-amplitude sand wave dynamics. In both models, biological evolution is described by a general law of logistic growth, constrained by a spatially varying carrying capacity. The carrying capacity is related to the bed shear stress, determined by the hydrodynamic output from the models. Conversely, the effect of organisms on morphological processes is implemented differently. In the small-amplitude model a parametrised coupling is applied that linearly relates the bottom roughness to the organisms' biomass density. In the finite-amplitude model this coupling is applied in a more advanced manner, where the effect of tube-building worms (mimicked by small cylinders) on hydrodynamics is described explicitly by additional formulations for drag and turbulence.

The small-amplitude model in Chapter 3 is based on a linear stability approach, resulting in coupled growth and migration rates of both sand waves and biomass under influence of tidal forcing. The results show that a local disturbance (either to the bed or to the biomass) may trigger the combined growth of sand waves and spatially varying biomass patterns. Moreover, the results reveal that autonomous benthic growth significantly influences the growth rate of sand waves. Finally, it was shown that biomass maxima tend to concentrate in the region around the trough and lee (steep) side slope of sand waves, which generally agrees with the field observations in Chapter 2.

In Chapter 4 the numerical shallow water model Delft3D is used to investigate the interactions between small sandy mounds of a few decimetres in height, created by patches of the tube-building worm Lanice conchilega, and finite-amplitude sand waves. The results show that the highest worm densities occur in the sand wave troughs, again generally agreeing with the field observations in Chapter 2. In turn, the combination of patches and mounds are found to mainly affect the initial stages of sand wave evolution. Particularly the sand waves' time-to-equilibrium and the initial wavelengths are significantly shorter. Also the equilibrium height is slightly decreased in some cases. As the time scale of mound formation is much shorter than that of sand wave formation, the mounds induce (and accelerate) the growth of sand waves with a similar spatial scale as the biogenic mounds. Therefore, initially this leads to shorter sand waves than they would be in an abiotic environment. However, near equilibrium the wavelengths tend towards their abiotic counterparts again, suggesting that the equilibrium stage is mainly determined by morphological processes alone.

The Delft3D model, without biological processes, is used in Chapter 5 as well, here to simulate sediment sorting processes in finite-amplitude tidal sand waves. These processes are strongly related to organism distribution, and can thus help to further understand the considered feedbacks in this thesis. The model revealed that typically the crests of sand waves are coarser than the troughs. In case of tidal asymmetry due to a residual current, net sedimentation shifts to the lee (steep) side of the crest and, as a result, larger grains are deposited on the upper lee slope, whereas the smaller grains are found on the lower lee slope. Due to sand wave migration, also the internal structure of the sand wave is exposed, which follows the same sedimentation pattern as found on the lee slope surface. In addition, by further increasing the heterogeneity of the sediment composition, wavelengths become longer wave heights lower. Finally, a model-field comparison reveals that, by including these sorting processes, the model provides estimates of wave heights that are in the range of observed sand wave heights in the North Sea.

Finally, the developed modelling tools provide the ability to predict both the habitat selection of benthic organisms and grain size distribution patterns in sand wave areas, together with the effect of these processes on sand wave morphology. By recognising and acknowledging the limitations of these modelling instruments, their predictive capabilities can be applied for the assessment of the morphodynamic effects of offshore engineering interventions, and support decision making in ecosystem-based marine spatial planning approaches.

Due to the COVID-19 crisis measures the PhD defence of Johan Damveld will take place (partly) online in the presence of an invited audience.