Dilu Mathew is a PhD student in the NanoElectronics Group (NE). His supervisor is prof.dr.ir. W.G. van der Wiel from the Faculty of Electrical Engineering, Mathematics and Computer Science. 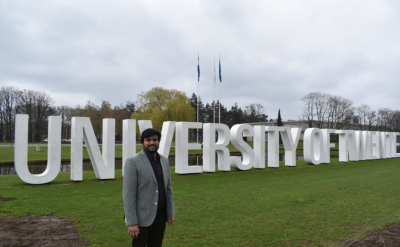 Cancer is globally the second most common cause of death. Cancer burden rises to about 10 million deaths and more than 18 million new cases in 2018. Cancers are often diagnosed at a later stage preventing curative treatment instead leading to only a palliative care. Early stage diagnosis helps in planning and executing a personalized curative regimen which improves patient’s survival chance. When a patient is diagnosed with cancer at a  later stage, the curative treatment becomes challenging. This underscores the need for early stage diagnosis of cancer. Consequently, screening methods that can test patients’ samples taken by no-/less invasive methods capable of early stage diagnosis is highly sought for. Based on this motivation here we developed lab-on-a-chip diagnostic systems for early detection of cancer. Different cancer markers for diagnosis are known including circulating tumor cells. However, inspired by the better prognostic and diagnostic values of tumor-derived extra cellular vesicles (tdEVs) and circulating tumor DNA (ctDNA), here we focused on developing sensing methods for both of them.

Three different types of nanoscale electrodes were fabricated: (i) nanogap electrodes (ii) nano interdigitated electrodes and (iii) nanodisc electrodes. Their potential use in the biosensing field were also explored. We also investigated the possibility of an unconventional electrical method and a more conventional electrochemical method for transduction using the above mentioned electrodes. Chapter 2 describes the fabrication of nanogap device using conventional optical lithography and DNA detection across it using the electrical method. Using this method, we were able to make nanogaps as small as 10 nm. Later, these nanogaps were used for DNA detection by performing a conduction enhancement for trapped DNA strands across the nanogap. We could detect the presence of metallized DNA strands trapped across the nanogaps in sub-micromolar concentration. Chapter 3 details the fabrication of nano interdigitated electrodes (nIDEs) and their electrochemical validation. The devices proved to produce an amplification of ~36 fold when operated in generator-collector dual mode compared to single mode and also with a high collection efficiency (98.6%). Both the amplification and the collection efficiency are higher than other reported open-system redox cycling devices. Moreover, we demonstrated that the amplification can be increased (2 times) further by working without a supporting electrolyte. Chapter 4 describes the biosensing application of nIDEs using nanoparticle sandwich assay for the detection of DNA molecules. In the presence of NPs, nIDEs produced a 4-fold amplification compared to nIDEs without any surface functionalization. This amplification is a result of bipolar effect on NPs (floating metals) and ion enrichment of the ferrocenium ions in a solution without a supporting electrolyte. This method helped us to detect DNA at 10 pM concentration making it competent enough to measure ctDNA in physiologically relevant concentration.

Chapter 5 describes the capturing of tdEVs on nIDEs, and its quantification using a sandwich immunosorbent assay on nIDEs. Anti-EpCAM antibodies, both for capturing and reporting, were used to immobilize tdEVs. The reporter antibody was tagged with alkaline phosphatase (ALP) enzyme that are capable of cleaving phosphatase group of a substrate molecule, thus making the molecule electrochemically active which are otherwise electrochemically inert. This provides and enzymatic amplification for detection of tdEV. On top of enzymatic amplification, redox cycling of the redox active molecules between the nIDEs provides a second amplification. As a result, we were able to quantify tdEVs with a dynamic range of 6 orders of magnitude and a limit of detection (measured) of 10 tdEVs/µl. Our method is 5 times better in terms of limit of detection and 2 orders better in dynamic range compared to next best reported methods. This unprecedented limit of detection makes our technique applicable for EV detection in a regime of physiologically relevant concentrations. Chapter 6 proposes a new type of nanoscale electrodes which are termed as nanodisc electrodes. We used these electrodes for single particle impact electrochemistry. The unique feature of this method is the active delivery of analyte particles (e.g. tdEVs) onto the sensor surface using electrophoretic force. This helps to improve the measurement speed even in a low concentration of the analyte. This method can be used for time-resolved counting of particles individually, thus providing a very high sensitivity. It also allows to distinguish between specific and non-specific binding of particles on the sensor surface improving the selectivity. As a proof of concept, we also demonstrated the detection of individual nanoparticles on the nanodisc electrode. The potential of nanodisc technology is huge due to its capability of faster measurement, reduced false negatives and false positives. Additionally, it is a scalable technology with easy and cheaper fabrication methods. Thus, chapter 7 explores the possibility of developing the nanodisc technology to a business idea. The chapter tries to look at the problem and the solution for the business idea and it also opens up the need of a market feasibility study based on its different aspects, specifically for the cancer diagnosis market. In short, the whole thesis tries to explore the different possibilities in developing a sensor that can be useful for cancer diagnosis.

Dilu Mathew is a PhD student in the NanoElectronics Group (NE). His supervisor is prof.dr.ir. W.G. van der Wiel from the Faculty of Electrical Engineering, Mathematics and Computer Science.