Wake-induced dynamics of anisotropic particles in homogeneous and shear flows

The PhD defence of Martin Assen will take place (partly) online and can be followed by a live stream.

Martin Assen is a PhD student in the research group Physics of Fluids (PoF). Supervisors are prof.dr. D. Lohse and prof.dr. R. Verzicco and co-supervisor is dr. R.J.A.M. Stevens, all from the Faculty of Science & Technology (S&T). 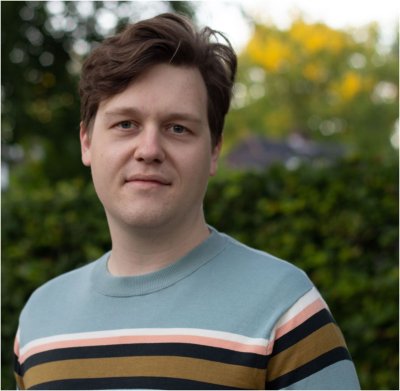 Dispersion of (low-density) rigid particle-laden flows with complex geometries is ubiquitous in both natural and industrial environments. We are usually interested in the particles' transport, deposition, and clustering in these systems. Furthermore, we would like to understand better how particles alter the flow field. Although, most systems are, in general, complex. To gain a better understanding, we concern ourselves with anisotropic particles and study how the anisotropy affects wake-induced particle dynamics. Here, we would like to find fundamental contributions which may apply to larger systems. For this, we performed numerical investigations at moderate Reynolds numbers. Anisotropy is introduced by systematically altering the particle shape and its mass distribution. We generally find high sensitivity to the latter parameters.

Firstly, we started with implementation details and validations for the immersed boundary projection method (IBPM). Here, the problem of interest is a freely rising or falling cylinder with eccentric mass distribution, for which we solve the incompressible Navier-Stokes equations in a frame attached to the particle. We demonstrated that the implemented IBPM could run stable to very low particle-to-fluid mass density ratios, corresponding to air in water.

Secondly, we explored rotational effects for a rising or settling cylinder with eccentric mass distribution in a quiescent fluid. For this work, we varied the mass offset, Galileo number (expressing gravity forces over viscous forces), density ratio, and moment of inertia. The particle is observed to undergo the resonance mode, where translational and rotational effects enhance each other, with the Magnus lift force at the base as the primary mechanism for a subset of buoyant density ratios. The transition to the resonance mode results in a considerably different trajectory with much larger rotational and translational amplitudes and a drag coefficient increase of up to four times. The onset to resonance shows a dependence on the density ratio, Galileo number and relative moment of inertia, for which we propose a simple model that collapses our dataset for these respective input parameters. Resonance was observed for moderate Galileo numbers for a centre of mass offset of only four per cent of the particle diameter, showing that particle dynamics are sensitive to this parameter.

Thirdly, we dealt with the dynamics of a freely moving buoyant sphere with eccentric mass distribution. In this study, we extend previous work to an unexplored Reynolds regime. The investigated regime extends from the onset of wake instabilities to where the wake breaks into smaller structures. Previous studies (whether numerical or experimental) primarily neglected mass inhomogeneity effects. The conventionally covered regimes in this work are denoted as steady oblique, zigzagging, and three-dimensional chaotic. We find the addition of mass eccentricity effects to yield significantly different path trajectories for the latter two regimes. For example, the trajectory may show a spiral or zigzagging mode for a specific offset range. For the zigzagging mode, we observe the Magnus lift force to be most dominant. Furthermore, we found that the drag coefficient was significantly altered by mass eccentricity. Strikingly, an offset of one per cent of the particle diameter was observed to nearly double the drag coefficient, showing that mass eccentricity is an essential parameter for practical purposes.

Lastly, we explored shape and size effects for a prolate ellipsoid (of aspect ratio 4) in Taylor-Couette flow. Here, the set-up consists of a particle-laden flow between a rotating inner and a stationary outer cylinder. The flow regimes we explored are the well-known Taylor vortex, wavy vortex, and turbulent Taylor vortex flow regimes. We simulated two particle sizes, l/d = 0.1 and l/d = 0.2, with l denoting the particle major axis and d the gap width between the cylinders. We selected two volume fractions of 0.01% and 0.07% for this work, respectively. We found that the particles, which were initially randomly positioned, ultimately display characteristic spatial distributions. We observed particles to get trapped in the Taylor vortex cores for a narrow Taylor range, with the Taylor number expressing the driving of the cylinders. Furthermore, we found the particle clustering for this mode to be size-dependent, with two main observations. Firstly, particle agglomeration at the core is much higher for l/d = 0.2 compared to l/d = 0.1. Secondly, the Taylor range for which clustering is observed depends on the particle size. The particles clustered at the Taylor vortex core aligned strongly with the local cylinder tangent, and we explained why.

In conclusion, we systematically investigated anisotropic particle effects and their corresponding fluid-structure interaction via numerical techniques. Our findings and insights regarding particle dynamics and global properties may be of interest to practical situations. Furthermore, the theoretical modelling corresponding to our findings may prove helpful in unravelling the complexities inherent in this field. We numerically confirmed that mass inhomogeneity forms a critical parameter and may strongly affect the motion of buoyancy-driven particles. Mass inhomogeneity can be used as a design parameter to trigger the desired particle behaviour. In such a fashion, large volume fractions with these particles may be able to tune or generate a turbulent flow field, potentially optimising the mixing of passive or active scalar fields.

The PhD defence of Martin Assen will take place (partly) online and can be followed by a live stream.