The PhD defence of Yorick Birkhölzer will take place (partly) online and can be followed by a live stream.

Yorick Birkhölzer is a PhD student in the research group Inorganic Materials Science (IMS). Supervisors are prof.dr.ing. A.J.H.M. Rijnders and prof.dr.ir. G. Koster from the Faculty of Science & Technology (S&T). 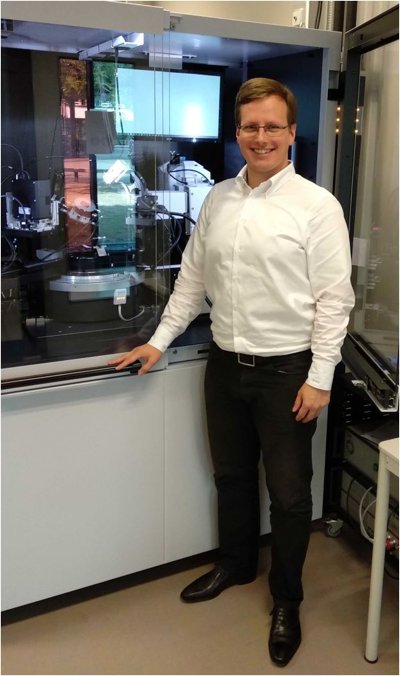 Most materials can be classified either as electric conductors or as insulators. Only a few materials possess the ability to switch their character depending on the conditions to which they are subjected. One of the exotic materials that can reversibly transition between a conducting state and an insulating state is vanadium dioxide (VO2). In VO2, the electronic phase transition is directly connected to a structural phase transition from a monoclinic symmetry at low temperatures to a tetragonal, rutile symmetry at high temperatures.

Among the many figurative knobs that can be turned to alter the properties of materials, strain or pressure stands out as a particularly powerful parameter. The strong coupling of the lattice and electronic degrees of freedom of VO2 was used to mechanically induce the phase transition at room temperature. A controlled amount of pressure was applied along the rutile c-axis of a VO­2 film by a nanosized metallic probe in an atomic force microscope. The phase transition was reversibly triggered at a critical pressure, as witnessed by a sizeable conductivity modulation. The pressure needed to induce the transition decreased with increasing temperature, and the phase coexistence line that separates the insulating and metallic phases was determined in a hitherto unexplored regime.

Furthermore, it was illustrated how four-dimensional scanning transmission electron microscopy (4D STEM) combined with electron energy loss spectroscopy (EELS) could be used to investigate both the structural and the electronic phase transition of VO2 with nanometer spatial resolution. Thereby, it was possible to image and track the metal-insulator transition of individual domains of VO2 as they nucleated and grew during heating and cooling cycles. In addition, the samples were analyzed by microfocus X-ray diffraction at various temperatures across the phase transition to quantify the lattice parameters.

The PhD defence of Yorick Birkhölzer will take place (partly) online and can be followed by a live stream.