The PhD defence of Koen Dwarshuis will take place (partly) online and can be followed by a live stream.
Live Stream 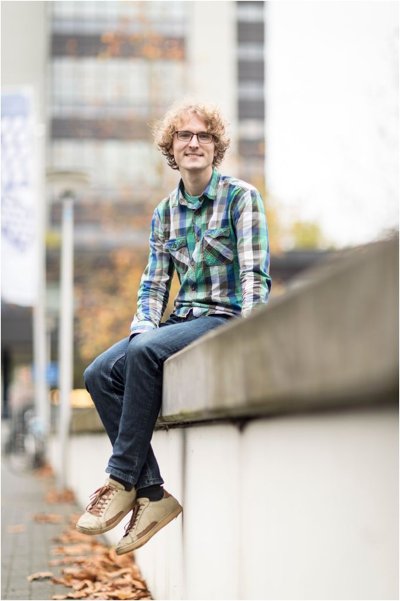 The deforming elements in flexure joints for a large range of motion are flexures. A flexure is typically a quite long, wide, thin strip that allows considerable bending and torsion, while supporting load in the other directions. Multiple flexures can be combined to design a flexure joint for motion in specific intended directions, e.g. a flexure-based revolute joint or a ball joint. A flexure mechanism generally contains multiple flexure joints and can therefore consist of hundreds of flexures. The efficient simulation of these complex mechanisms is crucial in the early design phase and for real time control.

History shows that flexures can be modelled efficiently using beam elements. However, this is not always sufficiently efficient and accurate and it limits the design freedom. This thesis presents four improvements.

The evaluation of early design concepts typically requires the computation of deformed configurations of a flexure mechanism, e.g. to obtain the maximum stress. Computation of such large deformations is time consuming, because the deformation has to be applied in multiple steps. Each of these steps has to be solved iteratively in order to ensure convergence of the computation. In this thesis, a new method is presented to efficiently obtain an approximation of the deformed configuration, by using insights about the kinematics of flexure mechanisms. Optionally, this approximation can be used as a starting point for the computation of the configuration with full accuracy, omitting the need to apply the deformation in multiple steps. Computing the approximation is up to 21 times faster than a conventional method, keeping errors in resulting stress and stiffness below one percent.

The maximum stress is generally one of the most important restrictions in the evaluation of flexure-based designs, but it can typically be computed the least accurate. Stress in beam elements is derived from internal stress resultants, which are the forces acting on the cross-section of the beam. This thesis evaluates different methods of obtaining these stress resultants. It is shown that the stress resultants relating to bending, shear and axial deformation can be obtained most accurately based on equilibrium. For torsion, an accurate solution was obtained using the Vlasov torsion theory.

Furthermore, the classic stress computation has been refined for beams with typical flexure dimensions. This is accomplished by adding terms to account for two large deformation effects, namely anticlastic curvature and Wagner torque. Also local stresses around the clamping of the flexures were considered. These refinements decrease the error in the maximum stress by about 50%.

The use of beam elements with constant cross-section limits the design freedom. This thesis presents a formulation for beam elements with a varying cross-section, to allow for the analysis of non-prismatic flexures. Design optimizations of several flexure joints shows that this extra design freedom can result in significantly better flexure joints.

Flexure joints contain parts which connect the flexures to each other. Although these so-called frame parts are intended to be very stiff, their compliance can significantly decrease the overall support stiffness of the flexure joints, reducing the performance. An accurate evaluation of the performance requires the stiffness of the frame parts to be modelled. However, frame parts typically have complex shapes, such that they can barely be modelled using beam elements. This thesis formulates a superelement by which complex shaped parts can be modelled efficiently. Examples show that flexure joints can be modelled efficiently and accurately by using the superelement to model frame parts and using beam elements to model the flexures.

Very complex flexure-based mechanisms can be analysed more efficiently and more accurately by using the methods and elements that are introduced in this thesis,. This may help the development of new flexure mechanisms, increasing the potential for using flexure mechanisms in practice.