The PhD defence of Fenna Hoefsloot will take place (partly) online and can be followed by a live stream.
Live stream

Fenna Hoefsloot is a PhD student in the Department of Urban and Regional Planning and Geo-Information Management. Supervisor is prof.dr. K. Pfeffer from the Faculty of Geo-Information Science and Earth Observation (ITC) and co-supervisors are dr. J.A. Martinez (ITC) and dr. C. Richter (Fraunhofer). 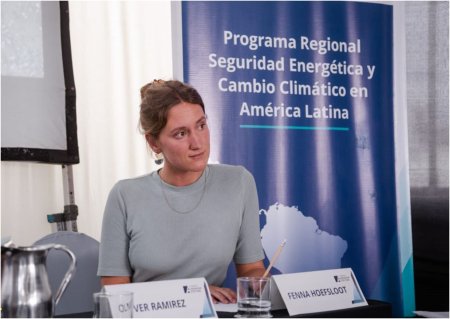 Innovation in digital water management, such as the use of sensors, supervisory control and data acquisition systems (SCADA), geographic information systems (GIS), and digitised water services, has become commonplace for cities to tackle challenges related to water governance and management. Also in Lima, Peru, datafication - the transformation of something, for instance, social activities, objects and their characteristics, or natural phenomena, into data through diverse actors, methods, and technologies for it to be recorded and analysed (Mayer-Schönberger & Cuckier, 2013) - is frequently attributed a key role in improving urban water governance. Nevertheless, these innovations play out in a context of severe discontent among the city’s residents due to the structural inequalities in Lima’s water distribution system.

Thinking through the concept of infrastructuring opens up analytical space to consider the politics within its everyday practices. Urban residents are embedded in multiple material infrastructures as well as more immaterial forms of infrastructure such as social networks, urban master plans, or discourses about the right to water and citizenship within a particular location (Kathiravelu, 2021). Focusing on the everyday is a move away from trying to locate power and pay more attention to the situated moments wherein infrastructure engages and enacts social relations and the (un)settling of these dynamics. By researching the mundane rather than the monumental, we turn our attention to the people, places, and experiences that are consistently excluded in dominant narratives and promises of infrastructural development.

The main research question is answered through a multi-method, multi-perspective, and multi-scalar approach. While the first empirical sections of the dissertation primarily draw on qualitative modes of inquiry at different scales, the later sections of the thesis employ review methods and collaborative design science to inform the development of a digital artefact. Both the conceptual analysis and the design process helps to inform theory about the potential of knowledge infrastructures to support more just water governance in Lima.

Chapter two analyses the effects of datafication of Lima’s water infrastructure as layered legibility-making practices (Scott, 1999) and aims to understand how the relationship between residents and the state is shaped through multiple data sources. We found that in the ‘smart city,’ where various structured and unstructured sources of data come together and databases are made interoperable, it becomes increasingly important to consider not only the role of a variety of actors beyond the state that are making the city legible (Li, 2005; Taylor & Richter, 2017) but also the links between the variety of data sources. While digital data technologies seek to increase equality and homogenisation, in practice, they seem to introduce new differences, multiple layers or boundaries, and, as such, reproduce the inequality in Lima’s water distribution system.

In chapter three, we move from the metropolitan scale analysed in chapter two to the neighbourhood level to understand the diverse ways people relate to digital infrastructure in the city. We ask: how does the digital infrastructure reconfigure the roles within the water distribution system in Lima, now imagined as centralised and digital rather than decentralised and auto-constructed?

Research on the impacts of datafication has generally focused on marginalised communities. While undeniably important, this thesis innovatively researches these relationships across socio-economic class and geographical locales. We conceptualise residents’ roles in the knowledge and water infrastructure as either ‘expert-amateurs’ or ‘smart citizens’ to analyse how digitalisation redistributes tasks, roles, and responsibilities within the system. The qualification of ‘expert’ is important in this case since the residents have advanced tacit knowledge about the needs of the community and the design, operation, and administration of the water distribution systems they have developed.

We conclude that it is essential to consider the differences between the digitalisation trajectory in formalised infrastructures and cities compared to auto-constructed spaces. While auto-construction continues to be an important form of infrastructural development in Lima, digitalisation hampers people from finding innovative ways to construct and manage water systems according to their own logic and needs. Specifically considering the underlying socio-economic inequalities in Lima, attention should be paid to developing a system that fosters the participation of all people and avoids the peripheralisation based on knowledge asymmetry.

In chapter four, we zoom out and analyse the different knowledge systems informing water governance approaches in the Rimac catchment area, Lima’s main water source. It took a visit to the mountains, and stepping into different theories, to see Lima as part of the Rimac river system, rather than only approaching it as a desert city. Moreover, going beyond the urban discussions on water governance was necessary to think more critically and comprehensively learn about the knowledge that should be included in the development and design of the Observatorio Metropolitano de Agua, a co-designed participatory observatory aiming to visibilise injustices in the water distribution system of Lima and Callao.

Chapter four draws on knowledge system analysis to examine the different water governance models as distinctive manifestations of understanding the socio-ecological changes in Lima’s hydrosocial territory. We conclude that it is possible to see how the hybridisation of the modern-scientific knowledge system (MSKS) and the Andean knowledge system (AKS) might represent a new chapter in water governance which is open to diverging perspectives for water governance to address current and future environmental challenges. Yet, at the same time, considering the situatedness of knowledge, it becomes apparent that as knowledge is extracted from its regional context and mobilised to serve other regions and people, this hybridisation is asymmetric and does not work towards overcoming structural inequalities amongst actors and between knowledge systems.

Chapters five and six are dedicated to exploring the potential of participatory urban observatories as knowledge infrastructures for creating collaborative pathways to more just smart urbanism. Chapter five proposes design principles to guide the development of just urban observatories. By doing so, we contribute to bridging the divide between data justice in theory and in practice. Chapter six describes the collaborative design process resulting in a prototype for the Observatorio Metropolitano de Agua para Lima-Callao (Metropolitan Water Observatory for Lima-Callao, MWO). Hence, while chapter four zooms out and places the discussions in Lima within the wider regional and discursive context, the subsequent chapters (five and six) zoom in conceptually on data justice within urban water governance.

Fenna Hoefsloot is a PhD student in the Department of Urban and Regional Planning and Geo-Information Management. Supervisor is prof.dr. K. Pfeffer from the Faculty of Geo-Information Science and Earth Observation (ITC) and co-supervisors are dr. J.A. Martinez (ITC) and dr. C. Richter (Fraunhofer).