The PhD defence of Aisen de Sá Vivas will take place (partly) online and can be followed by a live stream.
Live Stream 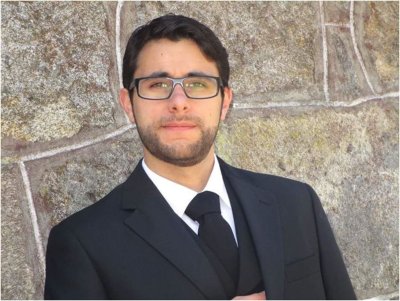 Cardiovascular diseases have become ubiquitous in the developed world. It is estimated that 18 million people die annually from a cardiovascular disease. Treatment of cardiac diseases is hampered by the inability of cardiac cells to replicate. With the advent of pluripotent stem cells, circumvention to this limitation has been possible. However, these cells are highly susceptible to the microenvironment they are cultured in. Moreover, common cell culture hardware fails to replicate the microenvironment that these cells experience in vivo, limiting the application of these cells to the study of the complex interactions that occur at the cellular level in a controllable manner.

Microfluidics finds its focus on the movement of liquids at the microscale.  Organ-on-chips (OoC) are microfluidic devices that enable the replication of the human microenvironment at the microscale. These devices enable cell culture in small channels and chambers that enable fine control over the biochemical environment these cells are cultured in, as well as the configuration of the different cells. These devices enable biomedical studies that would not otherwise be possible with standard cell culture hardware.

Despite their advantages, the adoption of these devices has not reached its full potential. Among the different limitations on the adoptions of this technology lies the complex setups and expertise required to set up cell cultures on such systems. Mainly, microfluidic interfacing is one of the major hurdles that OoC face when it comes to widespread adoption.

In this thesis, a summary of the different strategies adopted so far along with the benefits of adopting connection standards to facilitate OoC adoption is demonstrated in chapter two.

In chapter three, a Heart-on-a-Chip device where culture of human cardiac fibroblasts and human derived pluripotent stem cells differentiated into cardiac cells and endothelial cells are co-cultured in is demonstrated.  With a established co-cultured, electrical pacing, drug dosing and co-culture with human derived endothelial cells are demonstrated as a proof-of-concept as evidence for the potential these type of devices hold.

In chapter four, a fluidic circuit board (FCB) is developed with the aim to facilitate the fluidic actuation and interfacing of the Heart-on-chip developed in chapter two using off-the-shelf components. With this platform, standard connections were established among the different microfluidic components that would otherwise need to be connected with tubing, thus representing a tubeless solution for OoC fluidic actuation.

In chapter five, a workflow is presented for the adoption of a step-by-step procedure to integrate already developed OoCs into an FCB to facilitate the fluidic connections among all the different components.  Adoption of such approach enables throughput increase, modularization and a scalable approach to aid on the adoption of OoCs with and easy-to-use fluidic  connection interface.

In the last chapter conclusions and outlook are presented delineating the different challenges that OoCs face to become ubiquitous both in industry and academia.