Due to the COVID-19 crisis the PhD defence of Marcel Welleweerd will take place (partly) online.

Marcel Welleweerd is a PhD student in the research group Robotics and Mechatronics. His supervisor is prof.dr.ir. S. Stramigioli from the Faculty of Electrical Engineering, Mathematics and Computer Science (EEMCS). 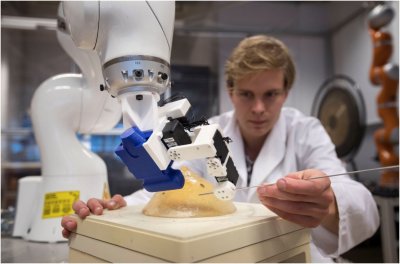 In women, breast cancer is the most common cancer, and it is the leading cause of cancer death in many countries. In the diagnostic workup of breast cancer, the biopsy is crucial to determine the malignancy of a lesion. Its success rate mainly depends on accurate lesion localization and needle placement. Especially when lesions are MRI-visible only, there are limitations in the accuracy, which can negatively impact the biopsy outcome.

Robotic assistance can take place inside and outside the MR bore and potentially improves the biopsy procedure's accuracy. For outside the MRI, the MRI and Ultrasound Robot-assisted biopsy (MURAB) project presents a robotic setup to assist the radiologist with an ultrasound-guided biopsy on an MR-detected lesion. The robotic setup consists of a seven-degrees-of-freedom robotic arm holding an end-effector positioned under a patient bed. The patient lies on this bed with the examined breast through a hole such that it is freely accessible by the robot. The robot achieves an accurate notion of the lesion position by combining the preoperatively acquired MRI images with stereo vision and intraoperatively acquired ultrasound images. Additionally, a patient-specific biomechanical model is built utilizing elastography to predict deformations caused by needle insertion. For inside the MRI, an entirely plastic MR safe pneumatic robot was developed, which autonomously takes a biopsy based on the MRI images.

In this thesis, several aspects of these setups are worked out in detail. For the MURAB project, an end-effector design containing an actuated needle guide, an ultrasound probe, stereo cameras, a projector and lighting is presented. A compliant controller is introduced, limiting the robot's energy in the null space, optimizing the joint positions relative to their limits, and avoiding the joint limits. Furthermore, the work shows how ultrasound feedback is taken advantage of during ultrasound acquisitions and the biopsy procedure. For the MR safe robot, a position sensor is developed based on a spectrophotometer.

Several phantom experiments show that the robot more accurately registers the preoperatively acquired MRI images with the patient and more accurately targets the lesion than is currently the case in clinical practice. During robotic ultrasound acquisitions, ultrasound feedback in the form of confidence maps is utilized to correct a preoperatively planned trajectory, obtain higher quality ultrasound images, and fully autonomously scan a beforehand unknown surface. Additionally, confidence maps are used to determine when to start tracking the lesion position when approaching the patient, and needle detection is used to correct for errors in the current needle position. Overall, this thesis shows some of the potential benefits of introducing robotics to breast cancer diagnosis.

Due to the COVID-19 crisis the PhD defence of Marcel Welleweerd will take place (partly) online.