Due to the COVID-19 crisis the PhD defence Lianyu Yu will take place (partly) online.

Lianyu Yu is a PhD student in the research group Water Resources (WRS). His supervisor is prof.dr. Z. Su from the Faculty of Geo-Information Science and Earth Observation (ITC). 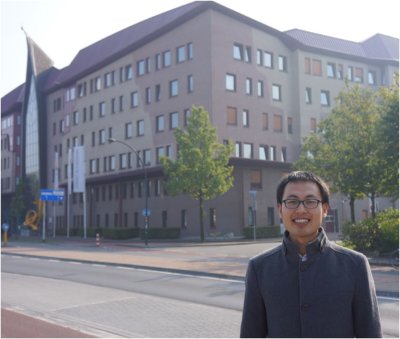 Recent climate changes have accelerated the coupled water, heat, and carbon exchanges in cold regions, which can further exert the positive feedbacks to future climate changes, leading to the increasingly vulnerable ecosystem, warming climate, and unsustainable Earth system. The current Earth system models (ESMs), however, usually adopted the single-phase flow physics with the omission of vapor flow and dry airflow in soil pores. This results in the model discrepancies and may lead to large uncertainties in the future projection of Earth system under climate change conditions. With such knowledge gaps in mind, this thesis is aiming to understand the underlying physics of water, heat, and carbon exchange processes and links it to the surface/subsurface hydrothermal, biogeochemical, ecohydrological regimes, with the focus on the freeze-thaw processes, snowpack associated processes, soil water and groundwater interactions, and cold-region ecosystem functioning.

First, in order to better understand soil freeze-thaw processes, we incorporated the effects of soil ice into the state-of-the-art soil mass and energy transfer model STEMMUS, i.e., STEMMUS–FT, based on the Clapeyron theory. Given the valid STEMMUS–FT results against the observations, we quantified the role of vapor flow and airflow, and their interactions with soil ice in frozen soils for the first time. The investigation demonstrated that the vapor flow is important in frozen soils as it connects the water and vapor transfer beneath the freezing front (sink) and above the evaporation front (source). The contribution of airflow to the total mass transfer is negligible while the interactive effect of soil ice and air was found on the spatiotemporal variation in advective fluxes in frozen soils.

Our results further confirmed that the relative importance of different soil heat transport processes varied over the time and space. The non-conductive heat processes contributed very minimal to the total energy fluxes during the frozen period except the latent heat flux divergence at the topsoil layers. The latent heat flux divergence and its effect on heat transfer were enhanced by the airflow during the freezing-thawing transition period. It is thus suggested to consider the vapor flow, thermal effect on water flow, and airflow for better portraying the soil hydrothermal dynamics, especially during freezing-thawing transition periods.

To quantify the potential divergence in the model interpretation of water-heat-carbon exchange processes rising from different soil physical processes, we designed several numerical experiments, including models with single-phase flow, two-phase flow physics and furthermore the explicit consideration of airflow, and testified the model performance using a typical Tibetan meadow ecosystem as a testbed.

Taken into account the snowpack processes, there is an enhancement of latent heat flux (LE) observed after winter precipitation events. Such an LE enhancement is sourced from the surface ice sublimation, snow sublimation, and the increased surface soil moisture with the relative contribution depends on the timing and magnitude of precipitation and the pre-precipitation soil hydrothermal regimes. The model with the single-phase flow physics cannot provide a realistic partition of soil mass transfer and the satisfactory explanation of LE enhancement as the two-phase flow model does

Furthermore, to elaborate the linkage between soil hydrothermal regimes and water and carbon cycle on a cold region ecosystem, we coupled STEMMUS–FT with the ecohydrological model Tethys–Chloris (T&C). It was found that explicitly considering the frozen soil process significantly improved the soil moisture and temperature profile simulations. The difference in the soil hydrothermal regimes among various representations of vadose zone physics exerted an impact on the vegetation dynamics mainly at the beginning of the growing season. Our investigations suggest that a certain degree of soil physical process complexity in Earth system models might be necessary for specific analyses.

Rendering from the fact that the detailed groundwater flow processes was rarely considered in ESMs, we built up the soil water-groundwater (SW–GW) coupling framework STEMMUS–MODFLOW, physically considering the heterogeneous water exchange between the SW–GW interface, and demonstrated its application in a cold region catchment. The developed STEMMUS–MODFLOW model can be further equipped with different complexity of vadose zone physics (e.g., freeze-thaw, vapor flow, airflow), surface hydrology (snowfall, runoff), soil and plant biogeochemical process, towards an integrated “from bedrock to atmosphere” Earth system modelling framework.

All in all, this thesis highlights the needs to understand the water, heat, and carbon exchange processes across the groundwater-soil-plant-atmosphere interfaces in an integrated and feedback coupling manner. Both the relevant observation and numerical modelling tools are required to reconcile and advance our understanding of the Earth system at different temporal and spatial scales under current and future climate conditions.

Due to the COVID-19 crisis the PhD defence Lianyu Yu will take place (partly) online.