Due to the COVID-19 crisis the PhD defence of Muchammad will take place (partly) online.

Muchammad is a PhD student in the research group Surface Technology and Tribology (STT). His supervisor is prof.dr.ir. D.J. Schipper from the Faculty of Engineering Technology (ET). 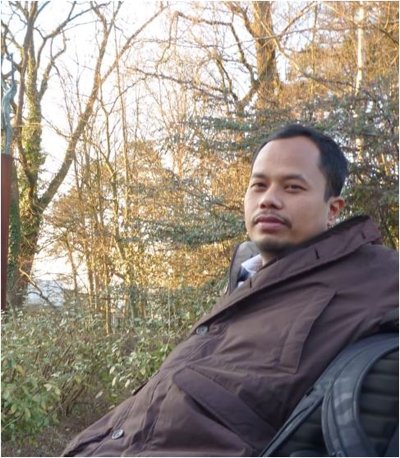 Surface texturing is an effective approach to increasing the tribological performance of lubricated mechanical components. It is known that introducing textured surfaces can significantly affect friction and load support of sliding bearings. In recent years, a great deal of effort has been employed to investigate the influence of the texture’s geometric parameters. It was shown in various experiments that such texturing enhances load support and reduces hydrodynamic friction; for instance, systems with two parallel sliding surfaces, mechanical seals, and reciprocating (cylinder-liner) contacts. Recently, in addition to surface texturing, the use of an artificial boundary slip surface is also of great interest with respect to lubrication. It is worth noting that when the effect of boundary slip is of particular interest in bearing analysis, for most previously published works cavitation was ignored, and most of them used a non-mass conserving equation. As can be seen in the analytical and numerical results, cavitation has a significant effect and the exclusion of cavitation in mathematical models may lead to wrong conclusions.

As is known, cavitation in a bearing is common and directly influences the hydrodynamic pressure and, subsequently, the load support and friction of the contact. In order to address such a cavitation effect, several cavitation models have been proposed by numerous researchers. In this research, the focus is on modifying the Reynolds equation by considering the cavitation model in which the mass conservation along the lubricated contact is fulfilled. The first order of the Reynolds approach is adopted. The hydrodynamic performance of a textured contact with boundary slip is investigated through analytical and numerical simulations. In order to analyse the boundary slip, the slip is modelled using the Navier slip criterion.

In the present work, an analytical equation based on the first-order Reynolds theory is derived. In this way, the Reynolds equation is extended by considering boundary slip and cavitation. Here, boundary slip is varied with respect to the location on the lubricated contact. For a single and double pocketed slip bearing, a mathematical model including boundary slip and cavitation has been developed, from which expressions of the pressure and flow rate can be derived. Applying pressure continuity at boundary points, a set of governing equations can be obtained for the flow rate and for constants of integration in the pressure expressions. The global contact geometry in this study is that of a rectangular textured sliding surface.

This thesis is divided into two parts. The first part relates to the modelling aspects and the methodology used to derive a modified form of the Reynolds equation capable of including wall slip boundary conditions. The second part is devoted to the details of individual research papers. This enables the reader to obtain a clear understanding of the overall purpose of the research from the first part while the second part elucidates the details.

Due to the COVID-19 crisis the PhD defence of Muchammad will take place (partly) online.