Due to the COVID-19 crisis the PhD defence of Afroditi Koutoulaki will take place (partly) online.

Afroditi Koutoulaki is a PhD student in the research group Energy, Materials and Systems (EMS). Her supervisor is prof.dr.ir. H.J.M. ter Brake from the Faculty of Science and Technology (S&T). 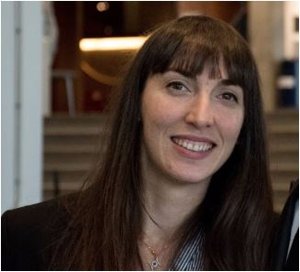 Mankind has been questioning the nature of matter since the ancient times. Up until now a few of the fundamental questions have been answered but there are many more on the list. Technological advances have helped scientists to build experimental setups, throughout the years, in order to prove and validate their theories concerning the nature of matter.

CERN and the Large Hadron Collider (LHC) is the highest energy particle collider built to date to study particle physics. The ATLAS detector is one of the two general purpose experiments around the LHC. The ATLAS experiment focuses on studies to understand the fundamental constituents of matter. The ATLAS detector requires technological advances in engineering in order to meet its goal. Cooling of the detector is one of the main engineering challenges. This thesis is concerned regarding evaporative CO2 cooling, as an advanced cooling method to enable ATLAS detector to meets its purpose.

At the outset of this thesis work, the decision was made to adopt evaporative CO2 cooling for the petal support module of the ATLAS detector. Remaining tasks were to optimize the cooling design and prove that the design cools well. Nikhef had available a prototype petal and a CO2 cooler for this investigation. The petal had to be equipped with heaters and dummy modules. A thermal finite element model of the petal had to be built and verified against measurements of the prototype. The aim was to use this model to optimize the petal design, and to reliably demonstrate that the design would perform safely at the high luminosity LHC upgrade. The optimized parameters are the fractional radiation length of the petal, minimizing hot spots such as electrical chips, and maximizing the thermal safety margins, such as the distance from the thermal runaway.

To go beyond the current standard practice in thermal engineering, a second goal was to evaluate the performance of CO2 cooling in micro-channels. The models for the mini-channel (diameter >1 mm) cooling required adaptation for this goal. An extensive list of empirical validated models and studies exist for the mini-channel (diameter >1  mm) CO2 cooling. Keniar et all studied experimentally CO2 flow boiling in a single channel of 1.55 mm hydraulic diameter (considered as mini-channel than micro-channel) and Mastrullo et all investigated the influencing factors of collected data of flow boiling of CO2 in smooth and enhanced tubes in a range 0.8 mm up to 8.92 mm. The smallest channel (0.5 mm, which could be closer to micro-channel size) investigated with CO2 flow boiling was presented by Ducoulombier et all. Ducoulombier et all studied the heat transfer properties of CO2 boiling flow at four saturation temperatures in a range of -10oC up to 0oC and mass fluxes ranging 200 to 1200 kg/m2s. Hellenschmidt et all studied the effects of saturation temperature on the boiling properties of CO2 in small diameter pipes of 2.15 mm, 1 mm and 0.5 mm.

Prediction models exist for micro-channels, as described by Dupont et all, and by Cioncolini et all but the validated database include only studies on temperatures >-10oC and evaporation in channels greater than 0.5 mm diameter. Significant effort has taken place over the last years to fill in the gap in this field of research. The goal of the research presented here is to extend the range of application of micro-channel evaporation modeling to below 0.30 mm diameter as well as to temperatures down to -20 oC, which is a typical diameter for cooling channels and temperature of interest for the particle physics community. Experimental validation of existing models is a major goal of this research.

The thesis focuses on the evaporative CO2 cooling in the ATLAS detector.

In chapter 1 the ATLAS experiment is described. The main subsystems of the ATLAS detector and the motivation for the upgrade are presented. Chapter 2 presents the theoretical-empirical models for mini-channels and micro-channels that are used in this thesis. Chapter 3 describes the petal detector. Real scale prototypes are useful during the R&D phase. The detectors in the strip endcap tracker have never been tested with evaporative CO2. A prototype was built and its cooling performance with CO2 tested. The tests were performed under various conditions. Chapter 4 covers the measurement of the cooling performance of the prototype petal with CO2 evaporation. The prototype is designed based on the UTOPIA layout, which is the original layout design. Chapter 5 describes the Finite Element Analysis (FEA) thermal model of the prototype based on the UTOPIA layout. FEA in combination with experimental results can be accurate enough to predict the mechanical and thermal behavior of the structures. A FEA model is favorable for the advance of complicated structure designs mainly because it saves a lot of effort, time and money compared to prototyping each design phase. Further studies and optimization plans are described in chapter 6 based on the FEA model. The thermal model is adapted based on the most recent layout design (which is different compared to the UTOPIA layout). Evaporative CO2 cooling in micro-channels is foreseen for high power density detectors. For this reason, experiments on a single straight micro-channel are conducted in order to validate the existing empirical models. Chapter 7 presents the experimental facilities and the design parameters. The results are discussed in chapter 8. Finally, a silicon-glass multi-micro-channel heat exchanger is chosen to be tested as a more realistic example of a detector cooling structure. Chapter 9 provides the experimental results of the silicon-glass multi-micro-channel device.

Due to the COVID-19 crisis the PhD defence of Afroditi Koutoulaki will take place (partly) online.