Due to the COVID-19 crisis the PhD defence of Enrico Balugani will take place online.

Enrico Balugani is a PhD student in the department of Water Resources (WRS) His supervisor is prof.dr.ir. M.W. Lubczynski from the Faculty of Geo-Information Science and Earth Observation (ITC). 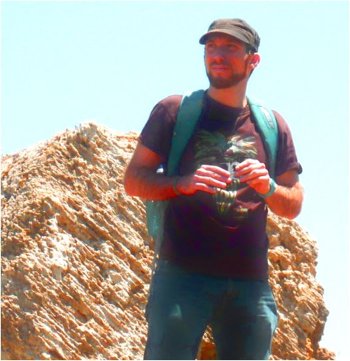 Water is a scarce resource in semi-arid and arid areas, where it is used by both fragile ecosystems and humans. Water can also become a scarce resource in other climates, whenever a period with no or rare precipitation events continues for too long. Climate change is predicted to increase the extent of semi-arid and arid areas, and to increase the frequency and magnitudes of droughts worldwide. Therefore, recent studies recognized the importance of accurate estimates of the various components of the water balance in semi-arid areas, and attempted the partitioning of evapotranspiration into the transpiration and evaporation components. Most of these studies tend to neglect soil evaporation whenever a dry soil layer develops at the soil surface; moreover, most soil hydraulic models assume only liquid water flow, or assume that Fick’s diffusion is the only process responsible for the transport of water vapour in the soil. However, there have been direct observations of soil evaporation taking place in deserts with very thick dry soil layers.

The objective of this thesis is to estimate the components of soil evaporation, i.e. unsaturated zone and groundwater evaporation, to increase the accuracy of water balance calculations in semi-arid areas and in dry conditions in general. To do so, these two components need to be defined in a framework consistent with the other components of the water balance, especially plant transpiration from the unsaturated zone and from the groundwater. The framework, then, should be tested in field conditions, focussing on dry conditions. Finally, the effect of the formation of a dry soil layer on soil evaporation should be analysed, especially addressing the problem of its simplification, for example by neglecting it when averaging over a whole day, or by assuming that Fick’s diffusion is the only transport mechanism for water vapour.

The first objective was addressed with an extensive literature review on studies on soil evaporation and ecosystem evapotranspiration from different scientific perspectives: hydrology, soil physics, ecology, atmospheric sciences. A framework with the definition of the soil evaporation components was defined in a way to be consistent across  these disciplines. This framework was then implemented in a post processing package connected with a soil hydraulic model to estimate the soil evaporation components individually. This framework was tested in a field study conducted near Salamanca, Spain, in a semi-arid area with the following characteristics: marked dry conditions during summer (June-September); savannah-like dehesa landscape, with few trees surrounded by grass that becomes dormant in summer; relatively shallow (0.5-10 m) water table, and mostly sandy soils. The field study required the combination of different techniques in order to quantify all the various components of the water balance in the area: the evapotranspiration was estimated using an eddy covariance tower, transpiration was estimated using sap flow measurements for the two species of trees in the area, and the soil evaporation components were estimated using the soil hydraulic model and the post processing package. The hydraulic model was set up by using: the soil properties in the area around the tower determined by sampling of soil and interpolated using geostatistics; the upper boundary conditions determined at 2 m height by a weather station close to the eddy covariance tower; the lower boundary condition of groundwater depth determined by soil piezometers in the area, and datasets of soil moisture, soil temperature and matric potential obtained by various soil monitoring profiles.

The study of the air-Dry Soil Layer (DSL) required various steps: (1) direct observation of DSL to study its behaviour; (2) setup of a laboratory experiment to reproduce the DSL observed in the field and to test it with various boundary conditions, to determine the main process involved in the transport of water vapour in the DSL; (3) use of the same experiment setup in field conditions, so as to include the complex interaction of the evaporative conditions of field conditions. To overcome the problem of lack of direct water vapour observations in the soil profile, the same approach as in CO2 respiration studies was used, i.e the study of the correlation between different possible driving factors and the observed evaporation.

The laboratory experiment showed evaporation taking place in sand even with a 70-180 cm thick DSL. The evaporation flow was independent from: the thickness of DSL in the range explored, the change in wind speed, and the change in radiation available at the soil surface. The evaporation rates observed were one to two orders of magnitude larger than those calculated on the basis of Fick’s diffusion. Evaporation rates were correlated with atmospheric pressure fluctuations, and could be modelled as the result of barometric effects on the gas phase flow in the dry soil layer.

The field experiment confirmed the observation of evaporation even in the presence of a 70 cm thick DSL. The evaporation rates recorded were 5 times those observed in the laboratory conditions with similar DSL thickness and potential evaporation conditions. The evaporation rates correlated well with the change in solar radiation and temperature at the soil surface and at 5 cm depth. A linear model based on these driving factors was able to estimate the evaporation rates magnitude and behaviour; the inclusion of soil temperatures at other depths improved the linear model (all variables with p <0.001) but only marginally. The main process for the transport of water vapour, therefore, was attributed to be the bulk transport of the gas phase in the dry soil layer due to temperature instabilities at the soil-atmosphere surface. When left on the field unattended, the experiment formed a dry soil layer only during a dry year and only ~12 cm thick; in contrast the soil in the area, consistently formed a dry soil layer 25 cm thick every year; this is probably due to the action of grasses that transpire the unsaturated zone water in the root zone until the wilting point is reached, and then go dormant in the dry season.

Due to the COVID-19 crisis the PhD defence of Enrico Balugani will take place online.