Due to the COVID-19 crisis the PhD defence of Jelle Will will take place (partly) online.

Jelle Will is a PhD student in the research group Physics of Fluids (POF). His supervisors are prof.dr. D. Lohse and prof.dr. C. Sun from the Faculty of Science & Technology (S&T). 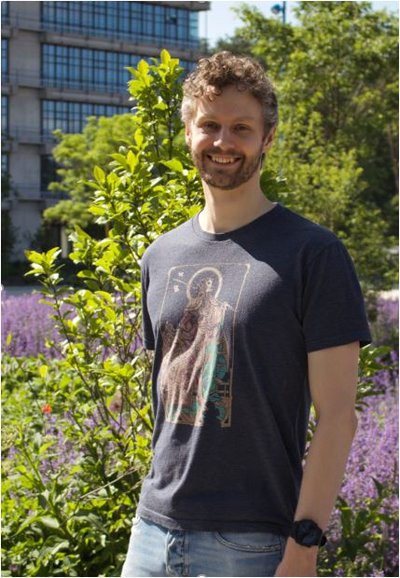 Particle-laden flows are omnipresent in both industrial applications and nature. In these systems two aspects are of primary interest; the first aspect pertains to the transport, deposition, and preferential clustering of the particles themselves, the second aspect deals with how the presence of particulates affects the fluid flow. These systems are very complex, therefore in this work we strive to provide fundamental insight in the dynamics and kinematics of (buoyancy-driven) particles at intermediate to high Reynolds numbers. We do this by systematically investigating the relevant parameters: separating geometrical and mass distribution related effects for rising (and to a lesser extend settling) particles.

In the experiments we use 3D printed particles with varying geometries and internal mass distribution in order to systematically scan the parameter space. These particles are released in a quiescent or turbulent  tank of water and recorded using multiple cameras. The recordings are used to reconstruct 3D translation and rotation, obtaining all 6 degrees of motion of the geometry as it moves through the fluid. Using these data we obtain particle (rotational) velocity and acceleration, and the associated fluid forces and torques acting on the body.

First of all, it is revealed that the dynamics of spheres are extremely sensitive to offsets of the centre of mass (CoM), which can be caused by any number of small inhomogeneities or defects in the sphere material. This novel parameter is found to introduce a rotational ``pendulum'' timescale into the equations of motion that interacts with natural particle rotation due to vortex shedding. The effect on both rotational, and remarkably translational parameters such as drag and amplitude and frequency of the path oscillation, is dramatic and can explain the discrepancies in literature data. Furthermore, this principle explains one of the reasons why settling and rising particles with CoM offset behave differently.

Thirdly, the effect of geometrical anisotropy was investigated by varying the aspect ratio of spheroids from prolate (needle shaped) to oblate (disk shaped). All particles used in the experiments had the same volume and density, thus the same buoyancy force, only the geometry was varied. As a function of particle shape a rich menagerie of distinct behaviours was observed and documented. Among these, the tumbling of particles close to spherical and the spiralling of extremely prolate shapes, stood out as unique. Additionally, we found that the drag of more anisotropic particles can surprisingly decrease for prolate particles.

Finally, neutrally buoyant prolate ellipsoids in Taylor-Couette turbulence were numerically studied in the Taylor-, wavy-, and turbulent vortex flow regimes. We found different particle preferential concentration based on these regimes, as well as based on the particle-size. The alignment of these particles was found to be of particular interest and depends very sensitively on the flow state and structure.

Concluding, we systematically investigated several dominant degrees of freedom pertaining to particle mass distribution and particle geometry for buoyancy-driven particles. Our findings regarding particle behaviour and dynamics, along with the documented global properties, can be used for modelling these types of particles in particle-laden flow simulations. It also provides new fundamental insight in the dynamics and kinematics of buoyancy-driven particles in general, that hopefully will prove useful in unravelling the complexities inherent in this field. We uncovered a new important parameter that can affect the motion of buoyancy driven particles in the centre of mass offset. This parameter can be used as a design parameter to obtain the desired particle behaviour. Large quantities of these particles can then be used to generate a turbulent flow or modify its properties, hopefully resulting in the ability to shape the turbulent flow in order to optimize mixing of passive or active scalar fields in the flow.

Waaier
Add to your calendaraHGbRdipTzsgMbuxYmdh4912401/07/2021 14:30Europe/AmsterdamPARTLY DIGITAL (ONLY FOR INVITEES) : PhD Defence Jelle Will | Wake-induced dynamics of buoyancy-driven and anisotropic particles

Due to the COVID-19 crisis the PhD defence of Jelle Will will take place (partly) online.