Due to the COVID-19 crisis the PhD defence of Xiaozhen He will take place (partly) online.

Xiaozhen He is a PhD student in the research group Elastomer Technology and Engineering (ETE). Her supervisor is dr. W.K. Dierkes from the Faculty of Engineering Technology (ET). 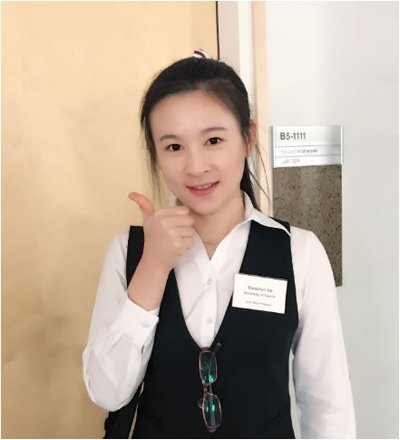 In order to meet the growing electricity demand and reduce CO2 emissions (mostly produced by burning fossil fuels), “green energy” production and its long-distance transport from remote locations have to be further developed. To transport the green energy efficiently with low electrical loss and low construction cost, the development of high performance HVDC technology is required. As a contribution to this, the present study is focused on the next generation HVDC insulation nanocomposites based on a thermoplastic polypropylene (PP) matrix containing tailored nanosilica. The latter was surface functionalized in order to improve its dispersion in the polymeric matrix, to tailor the charge trapping distribution and to reduce the space charge accumulation of the PP based nanocomposites.

Fumed silica was used as nanofiller in this study, and the charge trapping properties of the nanocomposites were tailored through different surface modifications via plasma or solvent free modification. Plasma modification is an effective way to perform chemical particle surface modifications. With acetylene as precursor, a hydrocarbon layer was deposited on the silica surface which improves the filler dispersion in the polymeric matrix by better matching the polarity of the polymer. However, the improved dispersion of the silica did not provide a significant improvement of the charge current density or significantly change the charge trap distribution of the nanocomposites.

Another effective and environmentally friendly approach for silica surface modification by a solvent free method with an acid as catalyst and conducted at room temperature. Nine types of modified silicas with silanes differing in polarity and number of alkoxy groups were successfully obtained via the solvent free modification. Silicas modified with all unpolar silanes showed better dispersion in the polymeric matrix than the polar ones; however, the unpolar silicas did not significantly alter the trap depth and only slightly increased the trap density of the nanocomposites. In contrast, polar silicas introduced deeper charge traps, and the trap depth and density depended on the functional groups of the modifying agents: silanes containing nitrogen atoms introduced the deepest traps and exhibited the lowest charge injection into the nanocomposites, which is positive for space charge reduction.

1)     Amine-amine hydrogen bond formation: If a charge trapped around one amino group gets enough energy to de-trap, it is highly likely that it will be easily trapped by a neighbouring amino group again, leading to a lower mobility of the charges.

2)     Change of chain mobility due to the presence of occluded polymer macromolecules constrained inside the silica clusters.

Both phenomena may lead to a higher energetic barrier of charge de-trapping, thus increasing the depth of the charge traps.

Two polymer blends with different miscibility were compared: an immiscible PP/EOC (polypropylene/ethylene-co-octene) and a miscible PP/PP-HI (polypropylene/ethylene-co-propylene) blend. The filler used for this study was APTES-modified silica. The comprehensive performance of the PP/PP-HI composite is better than the one of the PP/EOC composite due to a better polymer miscibility and flexibility, as well as lower conductivity and space charge accumulation. Due to the immiscibility of PP and EOC, phase separation occurred in these samples, while there is only one smooth phase in PP/PP-HI sample. The properties of the polymer blend also influence the location of the silica: In the immiscible PP/EOC blend, the silica is only located in the PP phase due to the lower viscosity of PP compared to EOC. In the miscible PP/PP-HI blend, the silica is evenly distributed within the whole polymeric matrix. In general, APTES-silica introduces deep traps in the polymer blends and suppresses space charge accumulation. Overall, the PP/PP-HI/APTES-silica composite exhibited the most promising dielectric performance (lowest space charge accumulation), which is beneficial for the HVDC cable insulation application.

Although the polar APTES-silica addition gave the best results, its dispersion is not satisfactory. Therefore, a further improvement of the compatibility of silica and polymer while maintaining good dielectric performance is needed. Hence, a newly designed modified silica was proposed. The structure of this silica comprises:

i)               a polar group: nitrogen-containing urethane, with the purpose to tailor the charge trap behaviour, and

ii)             an unpolar hydrocarbon moiety: ethyl, tert-butyl, cyclopentyl, phenyl or naphthyl, with the purpose to improve the compatibility between the silica and polymeric matrix.

This study showed that the five modified silica’s with an outer layer made of hydrocarbon moieties all result in a good dispersion in the PP matrix. The silica with the inner layer composed of the urethane moieties can additionally lead to a tailored charge trap distribution of the nanocomposites. Among all five modified silicas, the one based on a tert. butyl group as the outer layer showed the lowest charge injection and the lowest charge current in the nanocomposite. These performance improvements indicate that such a newly designed and modified nanosilica is a potential candidate for HVDC cable insulation nanocomposites.

However, as this research focuses on improving the nanoparticle dispersion within the PP based polymer matrix and reducing the space charge accumulation via nanoparticle surface functionalization, additional tests are needed get a complete picture of the suitability of these materials for HVDC cable insulation. Other aspects of importance such as short term and long term breakdown performance, dielectric loss, thermal conductivity, aging performance, and other properties have to be investigated in-depth; this was beyond the scope of the present study.

The newly designed and modified silica is a promising development to further improve the high performance of PP based insulation nanocomposites. Still remaining challenges are

ii)             to elucidate the influence of the thickness of the layers on silica dispersion and dielectric performance of the nanocomposite.

Meeting these challenges will be a big step forward in the development of these nanocomposites for HVDC cable insulation materials.

Due to the COVID-19 crisis the PhD defence of Xiaozhen He will take place (partly) online.