Due to the COVID-19 crisis the PhD defence of Yunchong Zhang will take place online.

Yunchong Zhang is a PhD student in the research group Sustainable Polymer Chemistry (SPC). His supervisor is prof.dr. G.J. Vancso from the Faculty of Science and Technology (S&T) and prof. dr. X. Sui (Donghua University). 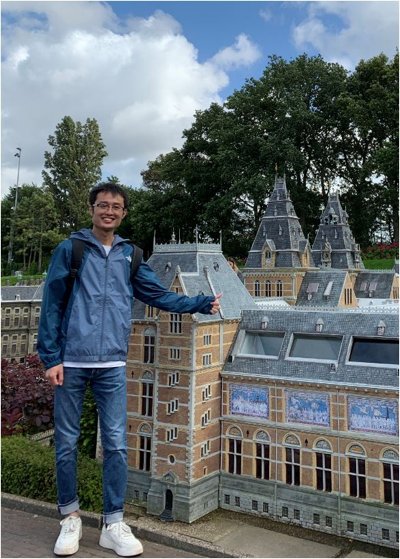 Pickering emulsion templates provide highly promising alternatives to construct advanced, polymer-based, hybrid materials with new or enhanced functions. In this Thesis, Pickering emulsion templates were used to obtain polylactic acid (PLA) composites with well dispersed, fully biodegradable nanocellulose. The Pickering emulsion templating approach offers a versatile route to disperse hydrophilic CNCs, with and without surface modification, in the hydrophobic PLA matrix. The rheological, thermal, and mechanical properties of PLA/nanocellulose composites with different nanocellulose content up to 15 wt% are elucidated in detail. Furthermore, the enzymatic degradation of PLA/nanocellulose composites was studied using the lipase from Candida rugosa and proteinase K from Tritirachium album. The application area of the PLA/CNC composites as foamed insulating materials was broadened by using a CO2 batch process with relatively mild operating conditions. In a next step, we exploited modified CNC particles to prepare functional hybrid materials with designer colors. We used dyed-nanocellulose to color polymethyl methacrylate (PMMA). PMMA was selected for its high transparency. The thermal and mechanical properties of the corresponding-colored composites were thoroughly investigated. In addition, the colored PMMA composite possessed good transparency. Finally, phase change emulsion gels consisting of two types of phase change materials were constructed using the excellent stability of Pickering emulsion templates. The gels exhibit some distinctive properties, including high stability, non-flammability, shape memory, and good mechanical properties, and have been explored as an environmentally friendly building thermal management system in model experiments. The materials synthesized and studied in this Thesis prove the great potential of the Pickering emulsion approach to obtain advanced engineering materials for the next generation “green” plastics.

In Chapter 1, a short introduction to the topics, the motivation, and overview of the work described in this Thesis are presented.

PLA is one of the most promising biodegradable thermoplastic polyesters to replace petroleum-derived polymers. This is ascribed to PLAs’ easy processability, biocompatibility, and good mechanical properties. But some properties, such as PLAs’ brittleness and low crystallization rate, limit its widespread application. Nanocellulose is often used to improve PLA properties due to its biodegradability and excellent mechanical properties. However, nanocellulose dispersion in a PLA matrix remains an issue to be tackled. In Chapter 3, the Pickering emulsion method was studied and introduced to disperse cellulose nanocrystals (CNC) in a PLA matrix. Compared to the composites prepared by other methods, the composites obtained using Pickering emulsions displayed an improved CNC dispersion. The mechanical and thermal properties of PLA were improved due to the well-dispersed CNC addition. Rheological evaluations of the PLA/CNC composites confirmed this conclusion.

In Chapter 4, a new preparation process of color PMMA is described. Dyed-nanocellulose was added to a PMMA matrix using the Pickering emulsion method to make colored PMMA. The dyed nanocellulose is still a good emulsifier for the Pickering emulsion. Besides improving the mechanical properties of PMMA, the well-dispersed dyed nanocellulose introduced homogeneous colors to PMMA without significantly decreasing the colored PMMA transparency. Using different reactive dyes attached to the CNCs, the color of the composites can be readily tuned. The intensity of the color can be adjusted by changing the nanocellulose content in PMMA.

In Chapter 5, the enzymatic degradation of PLA/CNC composites prepared by the Pickering emulsion method was investigated using the lipase from Candida rugosa and proteinase K from Tritirachium album. The PLA we used was not degraded by the lipase from Candida rugosa, but proteinase K was very efficient to enhance degradation kinetics. The pH and the ion concentration of the degradation medium influenced the rate of PLA decomposition. Furthermore, the addition of CNCs to the PLA matrix can significantly increase the rate of degradation.

Biodegradable PLA-based foams can replace petroleum-based foaming products. As is shown in Chapter 6, PLA/CNC composites were prepared by the Pickering emulsion masterbatch route to obtain composites with low CNC contents (i.e. below 5 wt%) to be used as nucleating agents in foaming. In addition, we prepared PLA/CNC composites with conventional melt blending. The composite films were foamed using a CO2 batch process under mild conditions. CO2 was selected as the blowing agent due to its cheap and “green” properties. The foaming results showed that the CNC dispersion had a significant influence on PLA foaming behavior. The addition of well-dispersed CNCs by the Pickering emulsion masterbatch route improved the PLA foam morphology due to the nucleating effect of the added CNCs. In addition, the CNCs increase the melt viscosity of the PLA, resulting in reduced foam cell expansion and better foam cell stabilization in the processing window studied.

As shown in Chapter 7, phase change gels consisting of paraffin and hydrated salts were constructed using water-in-oil Pickering emulsion templates. Fumed hydrophobic silica was used to stabilize the emulsion and to provide enough rigidity for the following polymerization process at 70 ℃. The paraffin in the continuous phase and the hydrophilic polymer chains in the dispersed phase provided dual protection to avoid the undesirable water loss of the hydrated salts. The gels displayed high stability and good water retention properties. After 500 thermal cycles, the gels exhibited essentially the same latent heat as the virgin gels. The gels were non-flammable and robust due to the nature of the hydrated salts. We successfully demonstrated the potential of these gels to be exploited in thermal building management systems.

Following the experimental work as described in the previous Chapters, Chapter 8 provides two directions for future work to yield designer functionalized particles to even further improve the properties of the composites or to give new functions to the composites.

Due to the COVID-19 crisis the PhD defence of Yunchong Zhang will take place online.