Due to the COVID-19 crisis measures the PhD defence of Alexander Blass will take place (partly) online in the presence of an invited audience.

Alexander Blass is a PhD student in the research group Physics of Fluids (POF). His supervisors are prof.dr. D. Lohse and prof.dr. R. Verzicco from the Faculty of Science and Technology (TNW). 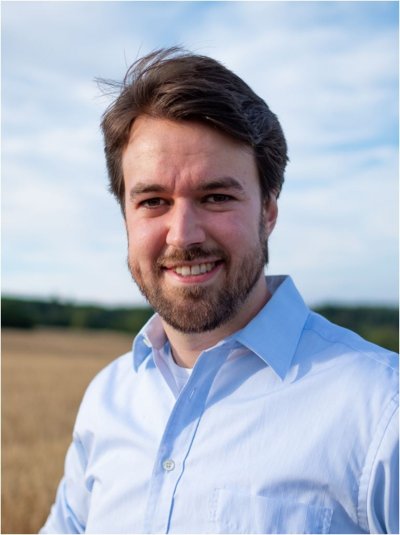 Turbulent thermal convection in all its variations is a very common phenomenon in our daily life. Not only for small applications but also on a large scale, thermal convection is our daily companion. About 70 percent of our Earth is covered by water, thus oceans play a big role in the nature of our planet and the Earth's climate system is heavily linked to it. In this dissertation, the behavior of large-scale structures in such a turbulent flow was studied by means of direct numerical simulations.

In recent decades, most experiments and simulations have focused on relatively small aspect ratios to achieve very high Rayleigh numbers. However, the structure sizes in many natural instances of convection are very large. We presented the emergence of superstructures in very turbulent Rayleigh-Bénard (RB) convection in very large domains. We then isolated the large-scale circulation (LSC) using a conditional averaging technique, which allowed us to evaluate statistics independent of the number of LSCs and their orientation.

When wall shear is added to pure turbulent thermal convection, the previously nearly two-dimensionally orientated thermal plumes get forced into a three-dimensional state. Depending on the relative amount of wall shear in relation to the thermal forcing, different flow regimes can be extracted. We have presented a wide parameter space of different thermal forcing, wall shear, and flow properties by performing simulations of Couette-RB flow in a large and very long rectangular domain, and were able to find the buoyancy dominated, the transitional, and the shear dominated regime.

Lastly, we approached the topic of sheared thermal convection from the point of different visualization techniques. We have used an interactive visualization framework to study the data created by the numerical simulations that we performed previously. To use volume rendering on such large-scale data, certain techniques, such as a parallel computing approach using a supercomputing cluster, are necessary to make these visualizations viable.

This dissertation is a significant step towards the better understanding of thermal convection on a large scale. Through the study of superstructures, we gained a better idea of necessary domain sizes for future numerical simulations of thermal convection. Our study on sheared RB convection laid the foundation for an extension of the Grossmann-Lohse theory for heat transport to the case of sheared thermal convection, which could universally describe the behavior of the heat transport in form of the Nusselt number as a function of thermal forcing, wall shear, and fluid properties. With the work on different visualization techniques, we created the resources necessary for future research to have access to state-of-the-art tools to visualize even very large data sets and therefore allow for a completely new perspective to study turbulent fluid dynamics.

Due to the COVID-19 crisis measures the PhD defence of Alexander Blass will take place (partly) online in the presence of an invited audience.