Gaurav Gupta is a PhD student in the research group Integrated Devices and Systems. His supervisors are prof.dr. L.K. Nanver and prof.dr. J. schmitz from the Faculty of Electrical Engeneering, Mathematics and Computer Science. 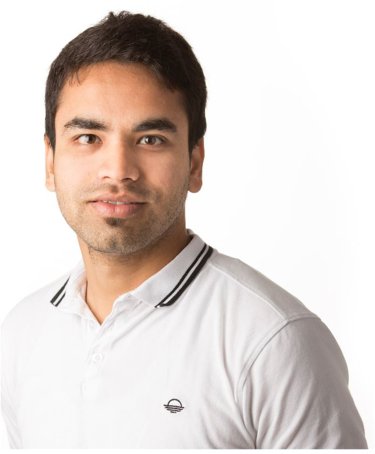 In the last seven decades there has been a revolution in the field of microelectronics which started with the invention of the bipolar transistor in 1948 and led to present day advanced computers and handheld devices such as smart phones. Continuous advancements in silicon (Si) based semiconductor devices (such as diodes, bipolar and field effect transistors) with their ever shrinking dimensions have fueled this technology revolution so far. The ability to dope Si with chemical impurities such as arsenic (As) or phosphorous (P) to control its conductivity played a key role in the remarkable success of the Si technology platform till date.

However, with the continuous downscaling of Si device dimensions to the nanometer regime and evolution of complex device architectures such as nanowires, nanofins and fully-depleted silicon-on-insulator (FD-SOI), it is increasingly difficult to match the device requirements by employing conventional chemical doping technologies. In addition, doping is even more challenging in emerging materials such as graphene, carbon nanotubes, 2-D materials, gallium nitride (GaN) and other wide band gap semiconductors. These materials are increasingly being sought for new application areas such as internet of things (IoT), artificial intelligence (AI) and wearable electronics. Among these materials, GaN is particularly interesting for both electronic and optical device applications. However, not only its doping is challenging, its production is also expensive which currently limits its widespread commercial applications. Monolithic integration of functional GaN based devices on a state-of-the-art Si CMOS platform could open up new applications in the area of high-power devices, RF electronics, lighting, sensing and display technologies and that with a reduced cost.

Conventional chemical doping techniques such as ion implantation or diffusion are also expensive, involves complicated process and requires high temperature for dopant activation. These aspects again make them incompatible with emerging materials and prevents their integration with Si platform for various applications.

This thesis broadly deals with two aspects. Firstly, it describes possible alternatives to chemical doping in dimensionally scaled semiconductor devices based on alternative emerging materials and investigates the so-called “electrostatic doping (ED)” approach as a possible solution. In this work, various reported ED approaches have been reviewed and new device concepts have been proposed and investigated via TCAD simulations along with electrical and optical measurements of experimentally realized devices. The conditions for ED, i.e inducing localized n-type or p-type regions in semiconductor using suitable metal work functions and gate biases, have been established. Among various possible ED based devices, the thesis particularly focuses on exploring the prospects of utilizing high-barrier Schottky contacts for devices such as LEDs, bipolar-transistors without adding any chemical doping. The thesis also explores the use of extreme work function contacts such as molybdenum oxide (MoOx) for realizing high-barrier diodes with bipolar conduction capabilities.

Secondly, this thesis investigates the possibility of utilizing atomic layer deposition (ALD) grown polycrystalline (poly-)GaN thin-films for device applications as a potential solution to low-cost GaN-on-Si technology platform. In this direction, various electrical and optical properties of ALD poly-GaN thin-films have been studied and their potential applications are discussed. The thesis also examines the applicability of various ED ideas developed in this work for ultimately realizing the functional ED-based devices in poly-GaN thin films.