Due to the COVID-19 crisis measures the PhD defense of Lutz Siemer will take place (partly) online in the presence of an invited audience.

Lutz Siemer is a PhD student in the research group Psychology, Health & Technology (PGT). His supervisor is prof.dr. R. Sanderman from the Faculty of Behavioural, Management and Social Sciences (BMS). 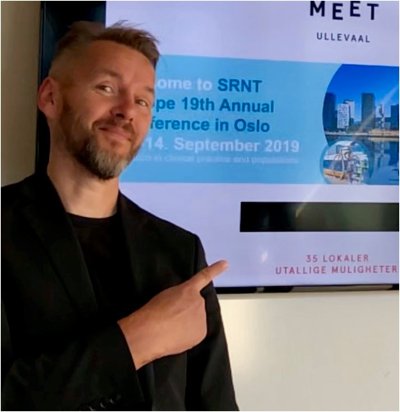 With the advent of e-health, we are currently facing a sea change in the psychological treatment of mental health problems, as various applications of digital interventions have an impact on clinical practice, clinical services and the global spread of psychological treatments, with blended treatment - the subject of this thesis - being one of the most promising. Blended treatment started with the idea of offering both face-to-face and web-based interventions in one integrated treatment, thus overcoming their previous separation - either face-to-face or web-based - and as a result making care more customer-friendly, better quality and more targeted. This positive expectation went along with the consideration that blended treatment combines the "best of both worlds", as the strengths of one form of treatment should compensate for the weaknesses of the other. For example, personal attention by a professional in the case of face-to-face treatment could compensate for the lack of personal contact in the case of web-based treatment. In turn, one of the main features of web-based treatment is the possibility of being available anytime and anywhere, which could bridge the intervals between sessions in face-to-face treatment.

Blending face-to-face and web-based interventions and the related question of whether this blending offers "the best of both worlds" was taken forward in this thesis in the scope of smoking cessation treatment. Smoking cessation treatment can more than double the success rates of smoking cessation attempts, thereby significantly reducing the development of smoking-related illnesses, which continue to kill more than eight million people worldwide each year. The Blended Smoking Cessation Treatment (BSCT), which is the focus of this work, was addressed by highlighting the themes of user experience, adherence and effectiveness.

The following questions were examined in detail:

·       How is the patients’ user experience in a blended face-to-face and web-based smoking cessation treatment (BSCT)?

·       How can adherence to BSCT be measured, how adherent are patients, and what predicts patients’ adherence?

·       Is BSCT at least as effective as F2F in terms of abstinence rates, and are patients more satisfied with either treatment?

To answer these questions, the results of four studies – framed by the study protocol at the beginning and a concluding general discussion – are presented in this thesis.

Chapter 2 provides the study protocol, offering an overview of the randomized controlled trial (LiveSmokefree-Study), which forms the framework of the studies in this thesis. The background, objectives and research questions are described as well as the corresponding outcomes, their measurement methods and instruments and the planned analyses. The LiveSmokefree-Study was the first study to examine the effectiveness of a blended smoking cessation treatment (BSCT) compared to purely face-to-face treatment (F2F). The study was designed as a single-center randomized controlled non-inferiority-trial with parallel groups. Patients (n = 344) were randomly assigned to either the blended or the face-to-face group. Both treatments consisted of ten sessions with equal content held within 6 months. In BSCT five out of ten sessions were delivered online. Both BSCT and F2F covered the majority of behavior change techniques that are evidence-based within smoking cessation counseling. All face-to-face sessions in both treatments took place at the Outpatient Smoking Cessation Clinic of the Department of Pulmonary Medicine of Medisch Spectrum Twente hospital in Enschede (The Netherlands). The web-based interaction of BSCT – which patients will do e.g. at home – used tools of Tactus Addiction Treatment`s website http://www.rokendebaas.nl. The primary outcome parameter was biochemically validated prolonged abstinence at 15 months from the start of the smoking cessation treatment. The main highlights of the study are that BSCT was developed by a team in which relevant stakeholders actively participated, that it demonstrated high ecological validity involving the heterogeneous population of regular patients of an outpatient smoking cessation clinic, and that it included a long term biochemically validated follow-up assessment.

Chapter 3 presents a qualitative study of the user experience (UX) of the Blended Smoking Cessation Treatment (BSCT), because UX has been shown as an important factor in explaining patients’ use of health care services in particular. We conducted in-depth interviews (n=10) and applied Hassenzahl’s model of UX to describe the patients’ UX of BSCT in routine care to address the question what positive and negative experiences patients have with BSCT in general and with the F2F sessions and the Web sessions in particular. Although the results showed that the patients experienced BSCT predominantly positively, we had the impression that BSCT's UX is characterized by a "hedonistic gap" resulting from the Web mode. While some patients felt stimulated by BSCT (BSCT stimulated to "quit smoking", "think", "dig deeper"), others reported being demotivated (BSCT "did not offer new things" or was "not interesting"). Especially for the Web sessions, most patients reported low identification ("online is not my style"). Also, the Web sessions evoked mostly negative comparisons ("Web was like handling a machine"; "bookkeeping"; "filling in tax forms"). This gap was then compensated for by the F2F-mode, giving an indication that BSCT may be "the best of both worlds", as the strength of one mode (in this case the stronger hedonistic aspects of the F2F-mode) could compensate for the weaknesses of the other mode. Even though it is not yet clear how relevant hedonistic aspects were, as BSCT was generally experienced positively, hedonistic aspects such as fun, enjoyment, pleasure and aesthetics seem to be a good opportunity to further develop BSCT.

Chapter 4 begins the study of adherence, since adherence is an indicator of the acceptance of a treatment and a primary determinant of its effectiveness. In the first study on this topic, we addressed the measurement, levels and predictors of adherence in BSCT by quantitatively analyzing the patients' face-to-face and web-based activities during treatment. Since blended treatment was still a relatively new field, we first explored how adherence could be measured in this area. We designed and compared two methods of measuring adherence to BSCT: a complex one, in which the treatment activities of BSCT patients were accurately recorded, and an efficient one, in which only the treatment time was calculated as an indicator of adherence; and we determined the advantages and disadvantages of both methods. Using the first method (activity-based), which we applied to a sample (n=75) of BSCT patients, we found that adherence to BSCT was rather low, and we found rather social predictors of higher adherence (living with a partner; having few smoking friends).

Chapter 5 continues the discussion of adherence by comparing the adherence and the predictors of adherence in BSCT with those of F2F. In addition, we looked at both treatment modes of BSCT in detail and compared the adherence and the predictors of adherence in the face-to-face mode of BSCT with its Web mode. Interestingly, when using the second method (time-based) for measuring adherence, which we applied to a larger sample (n=292) to compare BSCT to F2F, the adherence was rather high, and this equally in both treatments. And we found other predictors of higher adherence (higher age for BSCT and F2F; stronger social support only for F2F). The seemingly contradictory results on adherence levels could be explained by differences in the measurement procedures and differences in the analysis, which made the activity-based measurement procedure appear more specific and the time-based procedure more sensitive.

We also used the time-based method to compare the two treatment modes (F2F-mode vs. Web-mode) of BSCT and found that BSCT patients adhered more to F2F-mode than to Web-mode since they spent twice as much time in F2F-mode as in Web-mode. Furthermore, the predictors differed between the two modes of BSCT: to be living without children predicted a higher adherence to the F2F mode, while a combination of an extrinsic motivation to quit, a less negative attitude towards quitting and less health complaints did this for the Web mode.

Chapter 6 addresses the effectiveness of BSCT. We compared the abstinence rates of BSCT with a comparable face-to-face treatment to find out if the new blended treatment was non-inferior to the traditional face-to-face treatment. Furthermore, we compared the patients' satisfaction with both treatments. Contrary to our expectations, we did not find any evidence of non-inferiority of BSCT to F2F. On the contrary, in the most important measurement - cotinine-validated point prevalence abstinence - the intention-to-treat analysis showed significantly lower abstinence rates of BSCT (4.8%) compared to F2F (17.5%). Based on a Bayse factor calculation, we interpreted this as very strong evidence for the inferiority of BSCT. However, this result should be considered with caution, as unfortunately only very few samples were available to us for analysis, so that we must assume a confounding due to missing data. This assumption is also supported by the fact that this significant inferiority was not reflected in the CO measurements, nor in two of the four self-reported abstinence measurements. However, it must also be made clear that although we did not find inferiority of the BSCT in all measurement points, conversely, we did not find non-inferiority or even superiority of the BSCT in any measurement. We must therefore assume that BSCT was inferior. Interestingly, however, this inferiority was not found in patient satisfaction, which was also evaluated in this interim analysis.  Both treatment groups rated their own treatment results as well as the treatment and counsellors equally good.

Chapter 7 presents the general discussion in which we summarize the results of the sub studies, make methodological considerations, consider implications for clinical practice and further research, and return to the question whether blending offers "the best of both worlds". Looking at the results of the above-mentioned sub-studies, a mixed picture emerged. We have found indications that in BSCT the strengths of one approach outweigh the weaknesses of the other. But this only went in one direction: the strengths of the F2F-mode compensated for the weaknesses of the Web-mode, as was shown in the user experience description and in the analysis of adherence to BSCT. It seemed that the web-based part of BSCT could not bring any strengths into the interaction of the two treatment modes. If one then considers that BSCT leads to lower abstinence rates - i.e. is less effective - compared to F2F, while adherence, measured as treatment time, was the same for both treatments, BSCT appears less efficient. This would mean that the expected valuable further development would therefore not be experienced with BSCT.

We have approached the idea of a blended treatment with positive expectations, as we believed that this form of treatment fits better to the current lifestyle of patients and professionals. If we now look at the results of the studies, their methodological consideration, and their implications, we find that not every realization of blended treatment automatically is also an improvement. With this realization - Blended Smoking Cessation Treatment - it seems that the expected potential of blending web-based and face-to-face interventions has not been unleashed. This research project, which provided many detailed findings on the subject of blended treatment, is thus sharpening the eye for a better type of blended treatment in the future, so that the potential of this current and innovative approach, which is expected to combine the "best of both worlds", will be realized.

Due to the COVID-19 crisis measures the PhD defense of Lutz Siemer will take place (partly) online in the presence of an invited audience.