Luigi Capuano is a PhD student in the research group Surface Technology and Tribology (STT). His supervisor is prof.dr.ir. G.R.B.E. Römer from the Faculty of Engineering Technology (ET). 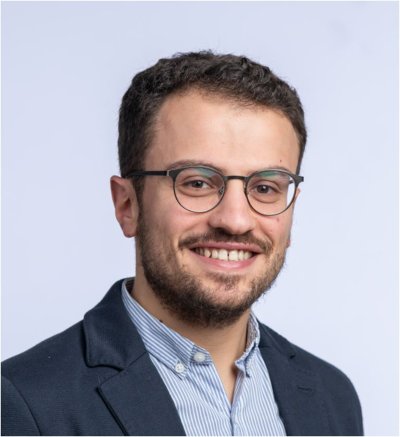 Synthetic sapphire (a-Al2O3) is a hard, transparent and mostly inert material. Because of its unique physical and chemical properties it is employed in many fields of technology. It is quite common, for example, to find sapphire in modern smartphones and watches. Crystalline sapphire can be processed using several techniques. Typical processing methods are: mechanical sawing/dicing, dry etching, wet etching and laser processing. In contrast with the other methods, material processing through lasers is fast, precise and flexible in terms of different materials and geometries. In this thesis, a two-step processing sequence to fabricate microstructures in/on sapphire substrates is presented and discussed. This two-step technique consists of ultra-short (typically picosecond or femtosecond) pulsed laser irradiation and subsequent chemical etching of sapphire. The radiation of focused ultra-short laser pulses can trigger non-linear effects in the material resulting in the material modification of sapphire. In particular, in the affected focal region of the laser beam, the molecular structure can be transformed from crystalline to amorphous. While crystalline sapphire is very inert and resistant to most chemical etchants, amorphous Al2O3 is reactive and can be selectively etched, permitting to create empty structures in sapphire which may be used for example as microfluidic channels. The method is still not fully exploited in industry due to several unresolved scientific and practical issues. The main objective of this thesis is to address some of these issues in order to achieve an optimized processing technique. To that end, first the physical phenomena governing laser-material interaction of subsurface laser processing of sapphire are studied and analysed. This is needed because, due to the complexity of these phenomena, the effect of processing conditions on the final structures is not yet fully understood. Therefore, a model is presented, which is used to simulate the interaction between the laser light and the sapphire during and directly after the ultrashort laser-pulse duration. The laser absorption phenomena considered in the model are: free electron absorption, multiphoton absorption, tunneling ionization, avalanche ionization, recombination of carriers, diffusion of carriers and heat diffusion. A main discovery from the simulations is that avalanche ionization plays a major role in the modification of the material. In fact, until the avalanche ionization is triggered inside sapphire, the other absorption mechanisms induce only a slight increase in the temperature of the lattice of sapphire. Moreover, a "shielding" effect was identified. That is, locations at which the laser energy is absorbed are also the locations at which free electrons are generated. In turn these free electrons absorb more laser energy, which "shield" lower regions of the material from the laser beam. To understand the effect of laser-processing conditions and, in order to establish optimized laser parameters (such as: laser pulse energy, laser pulse repetition rate, laser pulse duration and focal depth below the surface) to obtain uniform amorphous structures in sapphire, experimental analysis was performed using a picosecond laser source, as well as a femtosecond laser source. Several structures are presented and discussed produced in the bulk and on the surface of sapphire. It was determined that femtosecond pulses (230 fs) are best suited for the hybrid method of processing. Moreover, it was found that, there is a specific processing window at which the structures obtained show less cracks as well as uniform amorphized sapphire regions. The laser intensity must be high enough (> 1013  to 1014 W/cm2) to amorphize the material but, if an excessive intensity is used, the material cracks. To obtain an uniform and undivided amorphous volume, the laser pulse repetition rate must be at least 100 kHz, but, if a repetition rate higher than 1 MHz is used, the material breaks. Finally, the effect of two different selective etchants on the final morphology of the empty/hollow structures obtained after the etching phase is studied. Hydrofluoric acid (50% stagnant solution at room temperature) is the most used etchant in this thesis. The hollow/empty structures obtained after etching in this etchant are identical to the shape of the amorphized regions before etching (that is, the crystalline material is not noticeably etched). The use of a mixture of sulfuric acid and phosphoric acid (H2SO4 + H3PO4) at 180°C to etch the structures obtained with this technique, results not only in the fast etching of the amorphized material, but also in anisotropic etching of crystalline sapphire. A series of different structures were fabricated on the surface and in the bulk of sapphire to demonstrate the potential of the anisotropic etching of sapphire. The structures were analysed before etching and after several etching periods. The anisotropic etching of the crystalline sapphire of the modifications revealed structures showing well-defined geometrical shapes (trapezohedrons and tetrahedrons) and an etching-induced periodic pattern.