Jacopo Movilli is a PhD student in the research group Molecular Nanofabrication (MNF). His supervisor is prof.dr.ir. J. Huskens from the Faculty of Science and Technology. 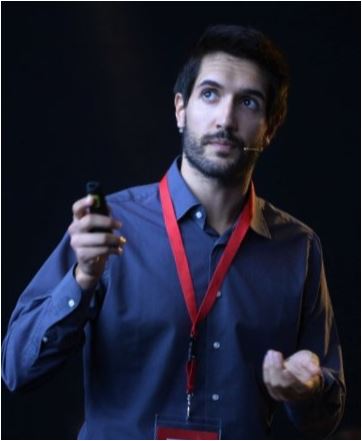 Sensitive and efficient bioanalytical detection is an ongoing challenge. The possibility of physically and chemically manufacturing micro/nano features on solid supports, as well as that of precisely engineering the properties at the interface, has paved the way for a new era of surface-based biosensing devices. Among others, DNA recognition platforms have attracted growing interest due to their potential use in drug formulations, food/environmental monitoring and biomedical applications. The high intrinsic specificity and sensitivity of DNA biosensors can drastically improve the diagnosis and therapy efficacy of genetic diseases, including cancer. However, the characteristics of the biorecognition interface, such as probe density, layer architecture and surrounding environment, together with the choice of the substrate, represent crucial factors for the hybridization process and the (ultra)high sensitivity of DNA biosensors. Signal amplification strategies are routinely exploited to assess reliable assays with lower limits of detection (LOD), representing opportunities for obtaining more efficient (bio)sensing platforms.

The studies presented in this thesis aim to develop a customizable surface strategy for biosensing applications that can finely tune the chemical environment at the biorecognition interface, by controlling the surface probe density and the physico-chemical characteristics of the substrate. This approach is based on poly-l-lysine (PLL), the functional properties of which are defined by the combination of appended groups anchored to its backbone in a preceding synthetic step, which results in a controlled functional group density at the interface upon self-assembly.

In the first part of the manuscript (Chapters 3 and 4), the probe density control has been demonstrated, concomitantly minimizing the non-specific interactions at metal and metal oxide biosensing interfaces. Selective adhesion on variable materials has been investigated by further functionalizing three plastic substrates, forming biorecognition DNA micropatterns and arrays. In the second part (Chapters 5-7), the focus has been on the signal amplification by substrate and method design. 3D architectures have been exploited to improve the sensitivity of DNA recognition, which has ultimately fueled the interest towards a customizable single-particle-based sandwich-assay for ultralow DNA detection.

In summary, multiple surface architectures have been developed for biosensing purposes, in which modified PLL played an important role to achieve the desired surface-chemical properties. The strategy based on customizable modified PLL with different appended groups has shown the possibility of precisely tuning the antifouling and probe-binding properties of the biorecognition interface. Different substrates can directly be converted in biosensors, while controlling the type and density of the biomolecules displayed. The adaptability of the modified-PLL approach has allowed the formation of functional layer architectures on topographically structured substrates (i.e. micropillar array, gel-like multilayers, and micro/nanoparticles) to increase the sensitivity of DNA detection, envisioning the ultimate goal of single molecule quantification.

We believe that the strategy to equip biorecognition surfaces with tailored modified PLL as presented here is a promising approach to provide suitable properties at the interface. These properties can be tailored by synthetic design, customizing first the PLL with desired functional groups, potentially offering a broad applicability in, among others, biosensing and responsive interfaces. Owing to the electrostatic interactions, modified PLL can be applied as an orthogonal anchoring layer for functionalizing (or simply passivating) virtually any substrate materials, such as metals, metal oxides, and polymers. This aspect underlines the versatility of the methodology and may assist in the development of a wide range of applications in lab-on-a-chip platforms, disposable ready-to-use biomedical sensors, (bio)reactive coatings, wearable devices, or water treatment equipment.

Jacopo Movilli is a PhD student in the research group Molecular Nanofabrication (MNF). His supervisor is prof.dr.ir. J. Huskens from the Faculty of Science and Technology.