Mustafa Jaffar-Bandjee is a PhD student in the research group Robotics and Mechatronics. His supervisor is prof.dr.ir. G.J.M. Krijnen form the Faculty of Electrical Engineering, Mathematics& Computer Science and prof.dr. J. Casas from the University of Tours. 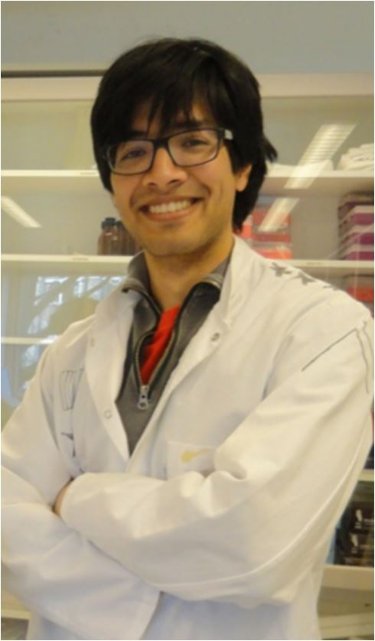 In some moth species, male adults possess pectinate antennae which detect the tiny amounts of sexual pheromones emitted by females. A critical step in the olfaction process is the capture of pheromone molecules which depends heavily on the shape of the antennae. In this work, we investigated whether and how the shape of the pectinate antenna influences its efficiency at capturing pheromone molecules. Pectinate antennae are however complex to study because they are multi-scale objects spanning over four orders of size. In the species Samia cynthia, the antenna is 1 cm long whereas the sensilla, which are hair-like structures hosting the detectors, are 150 µm long and only 3 µm thick. To simplify the studies of antenna – air-flow interactions we split them into macro- and microstructure and studied them separately.

In both cases, we used Additive Manufacturing to build artificial scaled up models and Particle Image Velocimetry to determine their respective leakiness, the proportion of air that flows through a permeable object instead of around it, at varying air velocity as encountered by moths in nature. We then adapted a heat transport model to solve the mass transport problem of pheromone capture by the microstructure. We found that the efficiency of the antenna is limited by both the leakiness of the antenna, which increases with air velocity, and the local capture, which is the proportion of molecules captured in the part of the airflow passing through the antenna and which decreases with air velocity. Eventually, the micro-structure does not have a strong maximum efficiency at a specific air velocity but, instead, is moderately efficient over the large range of air velocities encountered by a moth. Using FEM simulations, we developed a method based on the relation between drag and leakiness to combine the two levels and determine the capture efficiency of the entire antenna. We compared it with cylindrical ones and showed that a pectinate antenna is a good design to increase the surface of the antenna without significantly decreasing the capture efficiency.

Mustafa Jaffar-Bandjee is a PhD student in the research group Robotics and Mechatronics. His supervisor is prof.dr.ir. G.J.M. Krijnen form the Faculty of Electrical Engineering, Mathematics& Computer Science and prof.dr. J. Casas from the University of Tours.