A generic rotor dynamics model of a vertical rotor-bearing system 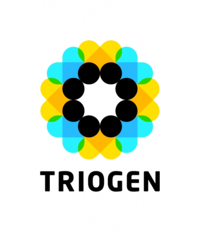 Triogen is a supplier of Organic Rankine Cycles (ORC). These machines convert thermal energy into electrical power. The generator is driven by a turbine wheel, which is mounted on a single shaft, together with the main pump. This shaft is vertically aligned and supported by tilting pad bearings. At full load, the shaft rotates with approximately 25.000 RPM.

The rotor dynamics model (fig. 1) consists of the radial bearings and the shaft, including the turbine wheel and main pump. Due to the nature of tilting pad bearings, the stiffness and damping coefficients of these bearings is very dependent on the position of the shaft in the bearing clearance. This shaft position is unknown, and therefore the relevant bearing properties are determined throughout the bearing clearance (fig. 3). The combined model predicts natural frequencies as function of rotational frequency (fig. 2), which is plotted in a Campbell diagram, together with the excitation frequencies.

The rotor dynamics model is subjected to several validations. First of all, the natural frequencies of a static shaft have been measured with an impact hammer test. Also, the vibrations of a rotating machine are measured. These measurements combined showed that the model seems to predict the correct rotational frequencies at which resonance could occur.