Johannes Schmidt-Hieber (34), the youngest professor at the University of Twente, urges caution with respect to the way we use machine learning and artificial intelligence (AI). They bring significant opportunities, but at the same time, he says, AI can never solve all our problems. ‘Expectations regarding the future of AI are overoptimistic. Scientists need to learn how to manage expectations better,’ explains Schmidt-Hieber. The UT professor of mathematics analyses the theoretical characteristics of machine learning and is a member of the expert group on the national AI strategy, which will soon be presented. Schmidt-Hieber will give his inaugural lecture at the University of Twente on Thursday 26 September.

In his inaugural lecture, he will discuss AI strategy and also argue for stronger links between statisticians and mathematicians in order to take machine learning to the next level. The Netherland’s AI strategy will need to ensure that our country can apply AI successfully. In a world where countries are committing fully to AI and powerful new platforms are emerging very rapidly, embracing AI is crucial to ensuring that the Netherlands stays competitive. The Netherlands is also in a good position to address the legal, ethical and technical risks and to ensure that we capitalize on the opportunities in a way that benefits all Dutch people, say those involved with the field.

Schmidt-Hieber supports this strategy, but he also urges caution with regard to those same risks. ‘We need to be wary of the assumption that AI can solve all our problems. Businesses and governments now all want to invest heavily in AI and machine learning, and they are expecting big returns on that investment. But machine learning methods remain vulnerable and they are easy to confuse. A small sticker on a stop sign, for instance, can be enough to convince a self-driving car that it is a speed limit sign. That’s a problem that we haven’t been able to solve yet, despite all the high expectations. If those expectations are not realized, the whole system crashes. We saw that in the digital revolutions of the 1950s and 1980s, as well as in the financial crisis of 10 years ago. Mathematical formulas were unable to predict the dramatic fall in property prices. We need to have more realistic expectations and, as scientists, we need to be sceptical and not ignore the warning signs.

A Babylonian profusion of languages

Schmidt-Hieber bases his approach on research carried out in the field of statistics. That is a discipline in which the large majority of scientists and businesses work on direct applications. But Schmidt-Hieber works more on the theoretical aspects. That is the stage at which statisticians should already be speaking roughly the same language as mathematicians, econometrists and psychologists - there should really be a shared language for everyone whose work involves data science. The professor will begin his lecture by talking about the ancient Bible story of the Tower of Babel, which, because of the profusion of languages in Babylonia, never made it all the way up to heaven. ‘We see the same risk in the field of mathematics. We are all talking at cross-purposes and that prevents us from learning. Our formulas have grown so complex that they are actually taking us further away from one another. We should be looking at the top of the tower more often, and as well as looking at applications, we should also pay more attention to the foundations. Too often, machine learning and data science in general are a mountain of algorithms. And if the algorithm is not quite right, you just make a few changes here and there. But that’s not the way things should be - we need more theoretical evidence.’ 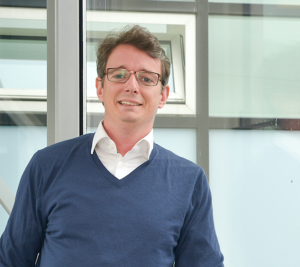 Professor Johannes Schmidt-Hieber (born Freiburg, 1984) has held the chair in Statistics, which he established, at the University of Twente (Faculty EEMCS) since 2018. He was awarded his PhD at the universities of Göttingen and Bern, after which he worked as a postdoc at Vrije Universiteit Amsterdam and ENSAE in Paris. He became an assistant professor at the University of Leiden in 2013. He has already received a number of prestigious grants, such as a VIDI grant in 2018.

On 26 September 2019 (at 16.00), Schmidt-Hieber will give his inaugural lecture entitled Towards a theoretical foundation of machine learning in the Waaier Building on the University of Twente campus. The lecture will be open to the public. For more information and to register, click here.