Stefano Stramigioli is professor of Advanced Robotics and chair of the Robotics And Mechatronics (RAM) Lab, a large lab of more than fifty people working on all different aspects of imaging, mechatronics and robotics. The group is broad and multidisciplinary. Thanks to its size and spectrum, it is able to compete at the international level with other research groups of similar or bigger sizes in their field.

Stramigioli covers a number of additional external positions: he has been the founder of the first robotics center in the Netherlands LEO Center of Service Robotics (2008), (formerly known as Romech). He was also founder of RoboNED (2010), which is now transitioned to Holland Robotics. Furthermore, he currently serves a second term as Vice President Research of euRobotics, representing the private part of SPARC, the contractual PPP with the European Commission running the biggest Civil robotic program worldwide for the last years. He is also co-chairing the Bio-mechatronics and Energy-Efficient Robotics Lab at ITMO University, St.Petersburg, Russia.

He has also received an ERC Advanced Grant (2.8 ME) for the project PortWings and has been successfully leading the acquisition of DIH-HERO, the Digital Innovation Hub on Robotics for Healthcare, a project in the H2020 program which has received an investment of 16 million Euros by the European Commission.

The RAM Lab is large “by construction”, in order to be able to internationally excel in the field of Robotics and AI, considering that all internationally relevant groups in this field are as large or bigger, due to the intrinsic multidisciplinary nature of the field. The main application domains are healthcare and Inspection and Maintenance, but also include activities with the national Police and more fundamental research. like in the ERC PortWings project. Its goal is trying to acquire an in-depth understanding of birds flight and to reproduce it with an unprecedented new Robotic Bird.

A characterising nature of Stramigioli’s way of working is to deeply understand systems from a mathematical and system theoretic perspective. He then uses this understanding to address the creation of new systems. Understanding the dynamics of systems is done using the paradigm on “port-based thinking” originally stemming from Bond Graphs and then Port Hamiltonian systems; this way of thinking, in the context of the ERC project,  is currently creating new physical insights, which are going further than the PortWings project. Stramigioli says: “I am extremely happy that thanks to the ERC grant, I can again really invest time in the core of what I love and for which I stayed in academia in the first place, and that is really to dig deep into the theory of mathematics and physics of things and then use my engineering intuition to use this understanding to create new things.”

The Laboratory holds a pretty unique infrastructure of many 3D printers, laser cutters for rapid prototyping, as well as a large number of robotic and imaging devices. These allow conceptualising and testing of completely new integrated systems. An example of such systems is the multiple award winning SunRAM, a MRI compatible Needle insertion robot, which is probably the most advanced and at the same time simple MRI compatible robot for needle steering.

On the Teaching side, he teaches the courses of Control Engineering at bachelor level and Modern Robotics at master level. He is also involved at the Ph.D. level as a lecturer at the Dutch Institute of Systems and Control for post graduate studies and is regularly invited for different guest lectures.

He is serving his second term as the Vice President for Research of euRobotics. He received different awards among which the IEEE-RAS Distinguished Service award and the euRobotics 2016 tech transfer award.

His interests lie in conceptual and practical aspects of robotics and physical interacting systems which brought to the introduction of concepts like Energy Tanks, Passive Sampling and Dual Layer Tele-manipulation Architecture and Energy Aware Robotics. 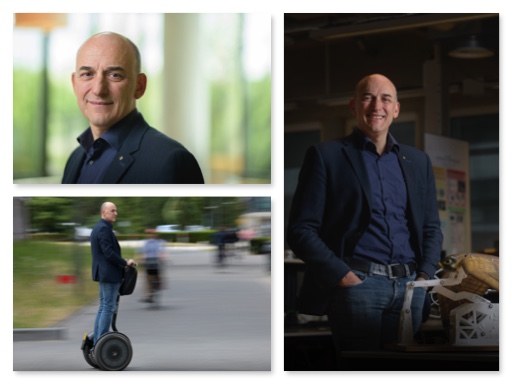