As a professor and chair of the department of communication science at the University of Twente in the Netherlands, Alexander van Deursen works in three lines of research with the overarching theme of digital inclusion. “Globalization, flexible labor markets and the transformation to a networked information society have resulted in a winner-take-all economy characterized by increasing polarization. Within debates concerning social inequality, inclusive societies, or the grand challenge of well-being, it is my goal to evaluate the contribution of technological developments. Original utopian views - based on extrapolations of the Internet's technological characteristics - predicted levelling effects on existing forms of social inequality. We now know that such prospects of techno-gurus are unrealistic. I map barriers of online engagement and explain differences in the outcomes that people get from engaging with internet technologies.” In the first line of research Van Deursen focuses on the use and effects of Internet (technology) in relation to a person's position in society. “Some sections of the population more frequently use applications that have the greatest advantages for accruing capital and resources (such as work, study and societal participation), while other sections relatively often choose to use entertainment or communication applications that offer less advantage. This makes the Internet a reinforcer of social inequality.” Besides increasing relative differences, there is the disturbing trend of absolute exclusion; when offline alternatives become unavailable. The professor points out: “By building on traditional classifications of potential areas of exclusion in my theorization, I try to understand who benefits in what way from the Internet.”

Digital skills play an important role in the translation of a type of internet use (e.g., search for a job) in the corresponding outcome (employment). The second line of research originates from Van Deursen’s internationally awarded doctoral dissertation and concerns the skills required to participate in society. Performance tests based on his framework of six types of skills (operational, formal, information, communication, content creation and strategic) revealed that assumptions about the level of digital skills among citizens are unjustified. “I have for example shown that older users outperform young users in content-related digital skills, that we should not underestimate the importance of traditional skills for performing on digital skills, that informal support only partly compensates for lacking digital skills, and that experience and use are not sufficient indicators of skill performances. In my VIDI project, I am currently studying the level and role of digital skills that are required for new, supposedly more intuitive and autonomous, devices, for example in the Internet of Things. The idea that the IoT is going to make decisions for us autonomously and thus let us all automatically benefit would suggest a reduction of social inequality, as the expectations and promises surrounding the IoT are immense. We do know that deterministic promises often fail to achieve the predicted positive effects. My role is to study the (un)even distribution of IoT access, ranging from motivation, skills, uses, to the eventual IoT outcomes. To date, behavioural factors needed to understand the impact of the IoT system have mostly been ignored. I'm going to investigate inequalities in IoT-skills from an individual perspective (performance measurements) and a social-contextual perspective (field research). The scientific goal is to develop theories about IoT-skills and the social-contextual mechanisms that influence these skills. My social goal is a population that is able to benefit from IoT by consuming less energy consumption and improving health.” The third line of research is an extension of the previous one and concerns the skills needed in the context of employment. In political and economic discussions about what knowledge and skills are important in our current and future society, these skills are referred to as 21st century skills. Examples are information management, communication, collaboration, problem solving, or critical thinking, skills that are also needed in the digital environment. Van Deursen explains: “In this line of research I respond to challenges such as the increasing demand for high skilled jobs, or the mismatch between what students learn at school and what the labor market requires.”

Van Deursen is currently working with several PhD students to establish a solid base for his research. “Off course it is very important to involve PhD’s in these research lines, as they provide new perspectives and invaluable input, and do most of the work . It is also the best time for them to develop their skills as a researcher. After their PhD, educational requirements will take more and more of their time. There is an ongoing debate about the balance between research and education and how much time researchers at universities should dedicate to teaching. It is a delicate subject. The need for and importance of good teachers is beyond any doubt. But as an employer, universities also need to stay attractive to researchers by offering them sufficient opportunities and time to develop their academic careers and research lines.”

Professor van Deursen has advised the Dutch government, European Commission, International Telecommunications Union, UNESCO and other national and international organizations on the social implications of the Internet, specifically on how to account for the contribution of technology to increasing social inequalities. He has been visiting professor at the London School of Economics and Political Science (LsE) and Arizona State University (ASU). He is on the scientific Board of Netwerk Mediawijzer and initiated the rapidly expanding DISTO project (from digital skills to tangible outcomes project) with professor Ellen Helsper (LsE). In addition to his academic work, he has been featured in numerous popular media outlets including all major national newspapers, international newspapers such as the New York Times, and many other outlets.

Currently, Alexander is leading three research projects '21st century digital skills, key to contemporary workforce' (consortium with NWO/NRO, ECP and CA-ICT), 'Any Thing for Anyone' (funded by the NWO VIDI scheme), and 'Digital Inequality in the Netherlands'. He wrote a book with professor Jan van DIjk called 'Digital skills, unlocking the information society'. Alexander chaired the Resilience Commission (of the BMS faculty) in 2017-2018, is working with Network Mediawijzer on digital inequality and digital skills in the Netherlands.

His personal website with an overview of all publications and projects is www.alexandervandeursen.nl. 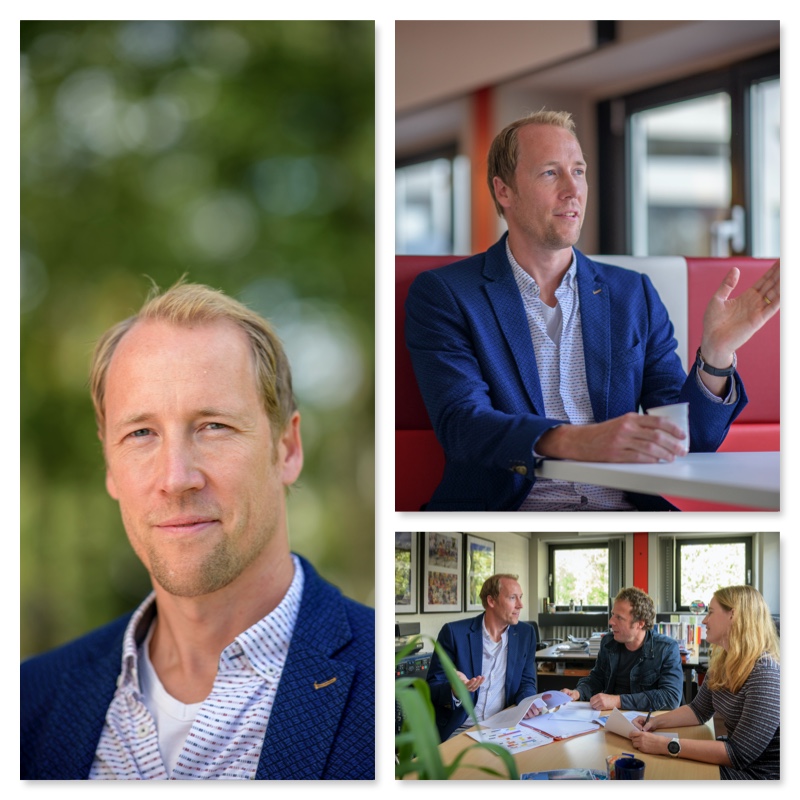 Click on thumbnails to open the picture folder. These press photos can be used without copyright restrictions.