Over the past 20 years, Albert van den Bergs work has focused on the development of the Lab on a Chip concept. For this, his research group has researched micro- and nanofluidics, new (nano)sensor concepts and innovative nanotechnologies using the MESA+ Nanolab facilities. Apart from basic and applied research, the group has also been very motivated to look at spin-off opportunities, and some 10 companies have found a start in the research group, the most successful one sofar being Micronit. After the Lab on Chip concept, Van den Berg and his research group have also worked a lot with (single) cells on chip and most recently, tissues and Organs on Chip.

Van den Berg explains: “The motivation for our research was both found in scientific questions and health- and sustainability related challenges, such as the desire to create better organ- and disease models for drug development and personalized medicine.” In terms of outreach, the group has co-developed a NLT module for VWO and presented its work at various public occasions (e.g. Zwarte Cross, Lowlands University, many Science Café’s). The work of the group has been awarded with Stevin and Spinoza prizes, 2 ERC Advanced grants and the group is also a main participant in two Gravitation programs.

“What I really want to do is to inspire young researchers to carry out outstanding nano research, preferably of great societal relevance. In my opinion, the first task of a university is to educate technically well-trained, critical and independent researchers. In order to do this, top-level research is a great help as it brings young people in contact with the newest development in science and technology. Staff members of our group have developed a special Lab on Chip TOM module, which is received very positively by the students. In our view, the best way to train and educate students is to have them participate in research teams on societal relevant challenges. Working in such a diverse team is often a great inspiration and motivation, and we believe this also stimulates critical and independent thinking. We also strongly believe in the social development of students, as illustrated by our two-yearly international group-workweeks and regular social activities (sailing, MTB, BBQ).”

Albert van den Berg received his MSc in applied physics in 1983, and his PhD in 1988, both at the University of Twente, the Netherlands. From 1988 to 1993 he worked in Neuchatel, Switzerland, at the CSEM and the University (IMT) on miniaturized chemical sensors. In 2000, he was appointed as full professor on Miniaturized Systems for (Bio)Chemical Analysis in the faculty of Electrical Engineering and part of the MESA+ Institute for Nanotechnology. In 1994, he initiated the international MicroTAS conference series, in cooperation with Prof. Bergveld. He published over 500 peer-reviewed publications (H=66 WoS, H=87 Google Scholar, as of August 2021) a.o. in Science, Nature, PNAS, NanoLetters etc, and from his group > 10 spin-off companies started. He received several honours and awards such as Simon Stevin (2002), two ERC Advanced (2008, 2015) and three ERC Proof of Concept (2011, 2013, 2016) grants, Spinoza prize (2009), Distinguished University Professor (Twente, 2010), Distinguished Professor (South China Normal University SNCU (China), 2012), Consulting Professor at Northwestern Polytechnic University NPU (China), 2017) and member of the Royal Dutch Academy of Sciences (KNAW) (board member from 2011-2016). He is a member of the Koninklijke Hollandse Maatschappij van Wetenschappen (KHMW), the Academy for Technology and Innovation (ACTI), and founding member of HDMT and EUROoCS, the European Organ on Chip Society. From 2014 to 2018, he was scientific director of the MIRA Institute for Biomedical Engineering (now TechMed Centre). In 2017 he became co-PI of the Max Planck - University of Twente Center for Complex Fluid Dynamics. In 2018 he became (co)director of MESA+ Institute for Nanotechnology. 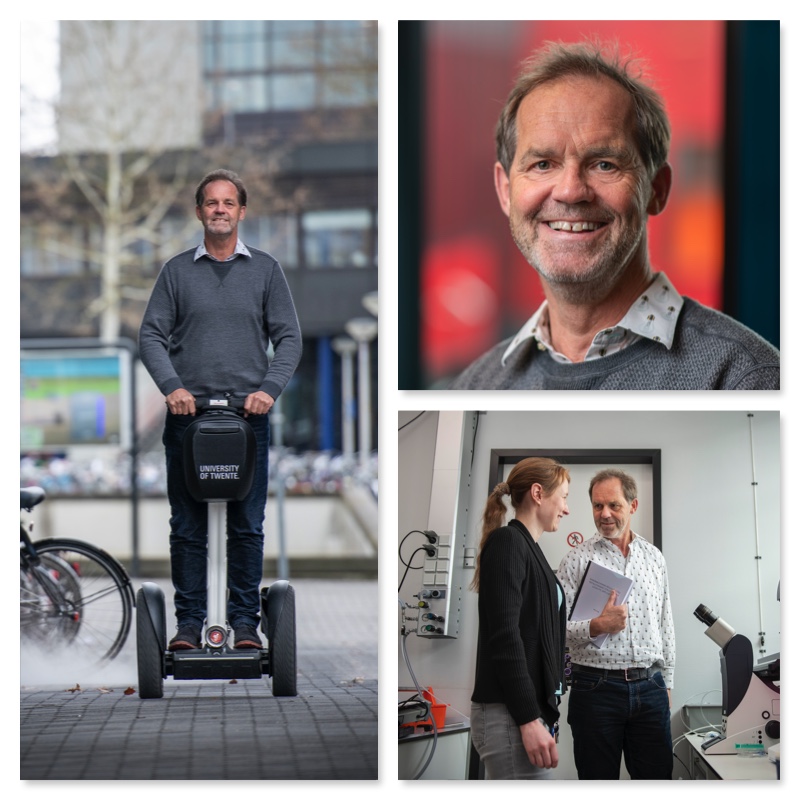