Leading edge erosion is a serious failure mode occurring at the leading edge of rotor blades in a wind turbine. The main cause of erosion is the impact of raindrops hitting the rotating rotor blades at velocities above 100 m/s.  Erosion decreases the wind turbine annual energy production by 2 to 3.7 %. Erosion resistant coatings are applied on the blades to lengthen the life of the blade.  Coatings should be tested for its erosion resistant properties and for this purpose, an in-house rain erosion test setup is used to produce water drops at high velocities and then they are impacted onto the surface of the ABS specimen to be tested. A typical erosion curve for a coating looks like as shown below. 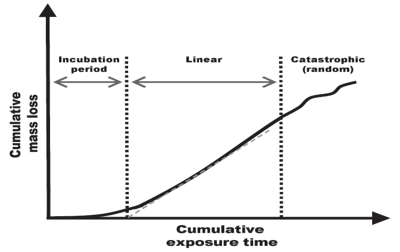 There are three stages in the erosion curve, and it is important to know when the first stage ends, and the second stage starts as that is when the mass loss starts to happen in the material. During the first stage, only crack and pits are formed but there is no significant mass loss. The use of Ultrasonics is investigated for the erosion damage assessment in Acrylonitrile Butadiene Styrene (ABS) which is a thermoplastic polymer coating. Piezoelectric sensors are attached to ABS specimen to employ two methods of ultrasonics, namely acousto-ultrasonics (active sensing) and acoustic emission (passive sensing). Lamb waves are produced in thin plates when a harmonic force is applied on it. Lamb waves have been widely used in the past for damage assessment in metals, polymers and composites and it is shown that certain Lamb wave modes are sensitive to specific types of damages.

A methodology was followed wherein preliminary tests were performed on the ABS specimen in the lab and the erosion damage was simulated by drilling a minute hole in the middle of the specimen. Active and passive sensing was used to find damage indicators (DIs) and to develop algorithms that were able to detect, to state the severity and to localise the simulated damage. These damage indicators and algorithms were then used in the rain erosion experiments.