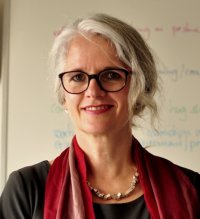 Angelika Mader is Assistant Professor at the Human Media Interaction group and Lecturer at the Creative Technology bachelor programme at the University of Twente.

Angelika Mader is coordinator of the H2020 project WEAFING starting in January 2019. She has contributed to the EU projects VHS (Verification of Hybrid Systems), AMETIST (Advanced Methods for Timed Systems) and DESTECS (Design Support and Tooling for Embedded Control Software). From NWO she received grants for “Verification of PLC applications” (postdoc), “Methods of Modelling Embedded Systems” (MEERVOUD), and “Modelling Control Aspects of Embedded Systems” (with R. Wieringa, NWO open competition). She has been reviewer for a number of conferences and journals, a committee member at NWO for MEERVOUD and VENI grants, and supervised PhD students and bachelor students. Angelika Mader was involved in setting up and developing a new bachelor programme “Creative Technology” at the University of Twente.