On 4 July 2019 Konstantin Nikolaev successfully defended his PhD thesis on the subject above. Konstantin did his research in the XUV Optics group of Fred Bijkerk at the faculty of Science and Technology at Twente. The work was spectacular in several ways.

The research concerns X-ray and Extreme UV characterization of periodic nanoscale structures. Advances in this analysis range from characterization of 1D systems, like multilayer short-wavelength mirrors, to nanoscale systems with a 2D or 3D, complex architecture. Konstantin managed to drastically improved the accuracy of the multilayer structure characterization by combining the analysis of X-ray reflectivity data and EUV normal-incidence reflectivity data, as compared to the traditional, sole use of X-ray analysis. This was done by using an uncertainty analysis based on the covariation matrix of the combined fits of the data at both wavelengths. It shows that the X-ray data primarily contribute to the accuracy of the layer and interface thicknesses, while the EUV data are more sensitive to the layer densities and atomic compositions.

Multilayer mirrors can have imperfections distributed in all three dimensions. In a W/Si multilayer system for instance, a 3D distribution of density fluctuations was observed in the Si layers. These fluctuations have been studied using grazing-incidence small-angle X-ray scattering. Assuming a 3D para-crystal-like fluctuation of the density distribution, the parameters reconstructed by numeric simulations were found to be in excellent agreement with independent observations by scanning transmission electron microscopy.

The dimensionality was also addressed in the X-ray standing wave technique. Although it allows the analysis of the atomic in-depth distribution of different species, information on the lateral direction is normally lost in this approach. Konstantin derived equations based on the dynamical diffraction theory in a many-beam approximation, which allows the detailed analysis of the 3D atomic distribution in the structure. This has been verified on experimental data of a Si3N4 lamellar grating structure using an incident photon energy in the EUV range and on a 3D nano-column Cr structure in the hard X-ray range. The result of simulations using our mathematical model showed a good agreement with nominal structure parameters.

Konstantin’s thesis includes several analytical approaches to extend the scope of current X-ray and EUV analysis. This notably concerns the broadening of the dimensionality of the analysis of nano-scale devices and structures, and methods to arrive at an enhanced precision by combining data from different wavelength ranges. 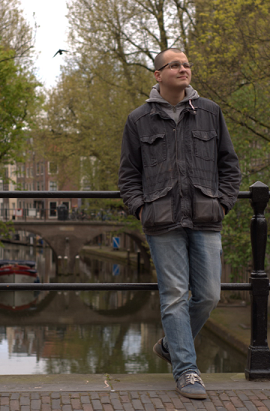