After treatment of breast cancer, patients are at risk of the cancer reoccurring. In the Netherlands, patients are followed clinically for at least five years to detect recurrent disease in an early stage using annual mammography to improve survival. However, frequency and duration of the follow-up are still debated, because half of the recurrences are actually found by self- detection in between follow- up visits. Although routine follow-up can provide reassurance, it also induces anxiety and stress in patients. Additionally, there is disutility and unnecessary costs from false- positive tests and subsequent invasive biopsies. Because of these limitations, and because of an increasing population with breast cancer, there is a potential shortage in healthcare capacity. Consequently, a more personalized follow- up, targeting intensive follow-up to those at high risk for recurrence is a necessary approach to allocate scarce resources and to optimize detection. 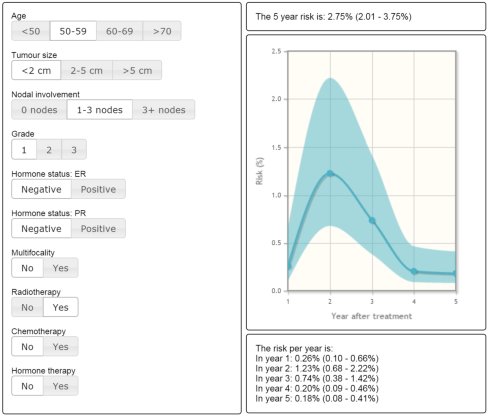 It was found that that survival after SP breast cancer and later LRR was relatively high, indicating the benefit of providing follow-up for early detection of recurrence. A comparison between Bayesian Networks and logistical regression showed better performance for the latter with regard to the prediction of recurrence using a large dataset from the Netherlands Cancer Registry (NCR). Using data from 37,320 patients, a time-dependent logistic regression model was developed to predict locoregional recurrence of breast cancer. This model was implemented in the INFLUENCE nomogram. Additionally, models to predict subsequent recurrences were developed and their patterns over time were assessed.

In study assessing the adherence to the Dutch 2012 breast cancer guideline, it was found that mammography use was related to the received treatments and women with lower risks received more follow-up than those with higher risks. Another study found that the current age-based recommendations for follow-up after five year do not correspond with the actual risk of recurrence. We formulated a Partially Observable Markov Decision Process (POMDP) to determine personalized follow-up schedules, balancing the benefits and harms of mammography follow-up, as well as the individual risk profile over time. And lastly, the model was examplified by determining optimal schedules based on age.

PARTNR is a collaboration between the University of Twente and the Netherlands Comprehensive Cancer Organisation (IKNL).