It’s all about students for Stefan Kooij

Stefan Kooij started his scientific career as a researcher. In Twente he discovered his passion for education. The program director of Applied Physics is among students on a daily basis. “It’s all about listening to students. But that doesn’t mean that we do everything they want.”

Every year students in the Netherlands judge the quality of their study program. All scores from this National Student Survey are collected in the so-called Keuzegids Universiteiten (Study Guide for Universities). The Applied Physics program is on top of the list for many years now, with outstanding scores in almost all areas. Stefan Kooij is proud of the performance. “It’s the reward for teamwork and personal attention.”

Kooij has been programme director since 2015. One of his biggest challenges from the start was the integration of the Twente Education Model of the university within the Applied Physics program. The bottom line of the model is education based on integrating projects. “Initially projects seemed nothing more than a nice addition to us,” Kooij acknowledges. “Our challenge was to offer a project in each quartile. Some considered that impossible for Applied Physics. We had two choices at that time. Either we could continue to resist, or we could do it in our own way. We have chosen for the latter because we think each program at the university is unique.”

In consultations with colleagues, it became clear to Kooij that you can only provide good education by working as a team. “Good education is creating an environment which is optimal for a student to learn and develop. That is to say: in the broadest sense. It’s not just about hardcore physics, about quantum mechanics, electrodynamics and statistical physics, because in the end only 30% of our students will end up in research. Most of them will go out all over the world, at companies and institutions. You want to prepare them for their future in the best possible way.”

In discussion with students

What do students need to get the most out of themselves? More than ever, the content of Applied Physics curriculum is about this question. In addition to the fundamental side of the profession, there is plenty of room for setting up, conducting and analyzing experiments. That also applies for activities outside the curriculum. “Every student has his own ambitions. One would like to do board work within a student association, the other wants to participate in a student team and the next would like to study physics in a combination with another study program. All of this should be possible. It means that we have to customize our fixed curriculum. And maybe sometimes it takes a student a little longer to complete his studies for this reason. It does not mean that the program carries out exactly what the student wants. We listen, engage in discussions and hold up a mirror up to them. If you want to train students to become responsible, critical and self-learning academics, you should treat them that way from day 1. In addition, I think we should see students much more as future colleagues.”

There is a lot, of interaction between students and teachers. Students evaluate the study program themselves and send their findings to the teacher. Together they explore how things can be done better. In a similar way, students and training staff collaborated in the organization of the introduction 2020, that could not take place in the usual way due to Covid19. Students can call Kooij on his cell phone for consultation every moment. Kooij in turn, can be found at Arago (the study association of Applied Physics) several times a week for informal consultation or attending an activity. “We very often meet and constantly exchange experiences and ideas. Students should not feel exposed but should feel that they are noticed. It’s all about involvement and approachability. It’s a fairly big effort, but the results are great and it is fun to do.”

Kooij is still researcher within the Physics of Interfaces and Nanomaterials group. He is engaged with the interface between solids and fluids. In recent years, the focus has been on the behaviour of fluids at solid surfaces. There is a close collaboration with the Physics of Fluid group of the University of Twente led by Prof. Detlef Lohse. “Our approach is from a solid state physics perspective while the fluid physicists are particularly interested in what happens at the other side of the interface. As such, we are highly complementary. As a program director I consider it important to keep in touch with research and with the MESA+ Institute of the University of Twente.”

Dr. E.S. (Stefan) Kooij (1968) studied experimental physics at Utrecht University and obtained his PhD for his research on the electrochemistry of semiconductors. In 2000 he came to Twente to work as a researcher in the Solid State Physics group, which is now the Physics of Interfaces and Nanomaterials group.

Kooij has been the program director of Applied Physics since 2015. He is also a member of the Education Innovation Platform and chairman of the Syllabus Physics Committee (which contributes to secondary education). 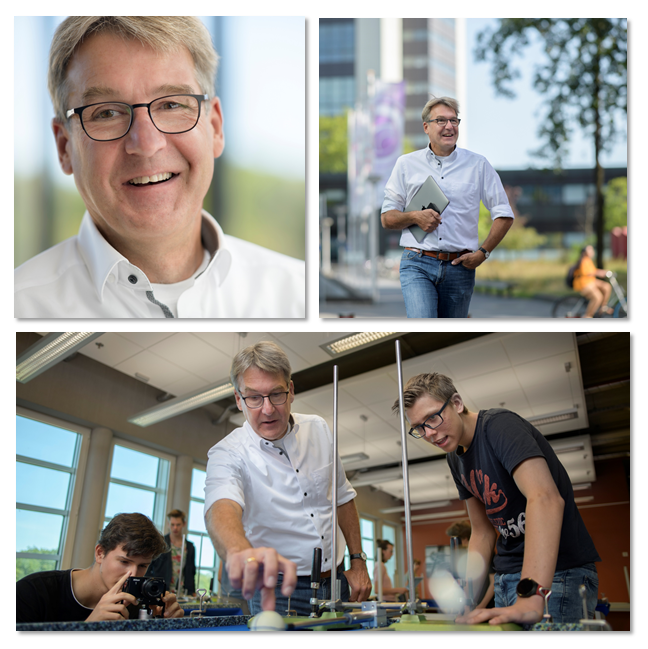 These Press Photos can be used with no copyright restrictions