The goals of the SCOLIOSIS project are; firstly, to design correction methods for scoliotic spines, and secondly to understand what causes and progresses scoliosis.

This involves the design of new methods for the correction of scoliotic spine, as well as computational and in vitro analyses on spines.

Scoliosis is a three-dimensional deformity of the spinal column, which occurs mostly in girls during adolescence. Although certain risk factors for the occurrence and progression of scoliosis are known, the underlying cause is still unknown.

Seen from the back the spine has a C- or S-shape instead of being straight. This lateral deviation of the spine is accompanied by an axial rotation of the vertebrae. If the scoliosis is progressive, it may be life-threatening without treatment, since vital organs as the lungs and the heart become oppressed. In mild cases the curvature is treated using bracing while severe cases are treated using implanted metal rods. 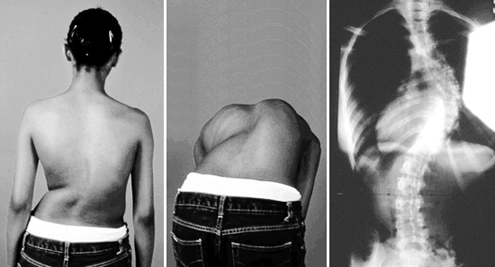 Within the group we have a long history of scoliosis-related design.

In cooperation with the University Medical Center Groningen, Gert Nijenbanning developed a bracing system that corrects scoliosis using force control. This brace, the TriaC, was patented and has been further developed by Baat Engineering (a spin-off company of the University of Twente) and is currently commercially available through Somas (in the Netherlands) and Boston Brace Inc. (in the US). Preliminary results of the brace in nine patients show that the brace reduces the scoliotic curve, while providing increased comfort as compared to conventional bracing. Clinical tests in a number of clinics in Europe and in the USA are taking place at this moment.

For more severe scoliotic curves we have, again in cooperation with the University Medical Center Groningen, developed an implantable scoliosis correction system that uses a rod made of Memory Metal. This system utilizes the superelastic behavior of the rod to achieve additional correction during a certain period after implantation. Due to the square cross-section of the rod, bending as well as derotation of the deformed spine can be achieved. Eventually, fusion of the vertebrae will occur. DuPuy Spine has obtained the patent rights to the device, and this year a number of these systems have been successfully implanted in patients by Veldhuizen (UMCG). 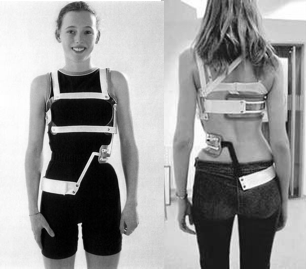 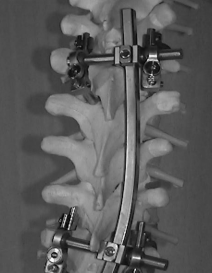 Disadvantage of all present correction rods is that the surgical treatment results in a rigid spine, because the rod is rigid and the vertebrae will fuse, meaning that the young patients will have a stiffened back for the rest of their life. Moreover, it is not possible to have early surgery when the deformity is still less severe, because surgery has to be postponed until growth has more or less stopped. Another disadvantage of existing correction rods is that they are form-controlled, i.e. they impose a shape to the spine. Due to the inevitable elasticity of the correction devices, a complete correction cannot be achieved.

Examples of scoliosis correction rods. From left to right the systems of Luque, Harrington, Cotrel-Dubousset and Zielke

With our current research we wish to realize a non-fusion scoliosis correction device, a device that corrects scoliosis completely, but prevents fusion.

More recently, the group has started to again investigate the underlying causes for scoliosis. The group of Castelein at the UMC Utrecht has developed a theory about the importance of posteriorly directed shear forces in the initiation of scoliosis. Together with the UMC Utrecht we will setup a longitudinal study to test this hypothesis using our current and future spinal models.

Are you a master or bachelor student and would you like to do a research project on scoliosis, please send an email to Jasper Homminga (j.homminga@utwente.nl) or Edsko Hekman (e.e.g.hekman@utwente.nl). We are always on the look-out for good students to help us analyze and solve the problems of the scoliotic spine.