The goal of this project is to refine mechanobiological modelling and advance prevascularized bone tissue engineering by characterizing the effect of mechanical signals on bone precursor cells, endothelial cells, and co-cultures of these cells, using a novel semi-high throughput screening system.

Mechanical signals have a strong effect on tissue development and organization. Optimal integration of an engineered tissue is only possible if this tissue is tailored to the mechanical environment after implantation.

This illustrates the clear need for a screening system that can determine the effect of strains and shear stresses on (combinations of) different cell populations. Such a system should have the following characteristics:

Within this project, a novel lab-on-a-chip based semi-high throughput system to screen for the combined effect of surface strains and shear stresses on multiple cell populations will be developed. This system will then be used to characterize the effect of these signals on the cell populations that are needed for prevascularized bone tissue engineering.

As such, this project will result in a vast refinement of mechanobiological modeling. This allows for a better preconditioning of engineered tissues to the mechanical environment after implantation. It will also advance the complementation of bone tissue engineering with vascular tissue engineering, which is a promising strategy to increase the size of engineered tissues that survive after implantation to a clinically relevant scale.

Schematic overview of the system that will be developed 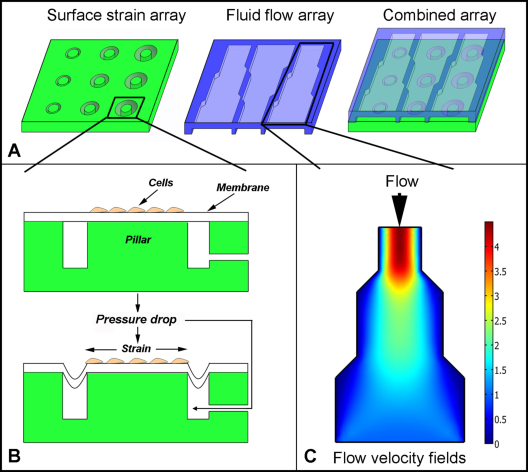 Are you a master or bachelor student and would you like to participate in this research, please send an email to Jeroen Rouwkema (j.rouwkema@utwente.nl). We are always on the look-out for good students.