“Sky is not the limit, it’s just another playground.”

The detection of radio waves coming from extraterrestrial objects, first discovered in the 1930s by Karl Jansky, was the birth point of a new branch of science—radio astronomy. As a result, astronomers broadened their perspective, and started to look at celestial objects not only in the optical domain but also in the radio frequency domain.

One of the first breakthroughs made with the aid of radio astronomy was the discovery of cosmic background radiation in 1964 by astronomers Arno Allan Penzias and Robert Woodrow Wilson. This, albeit an arbitrary discovery, provided evidence to support the Big Bang Theory. 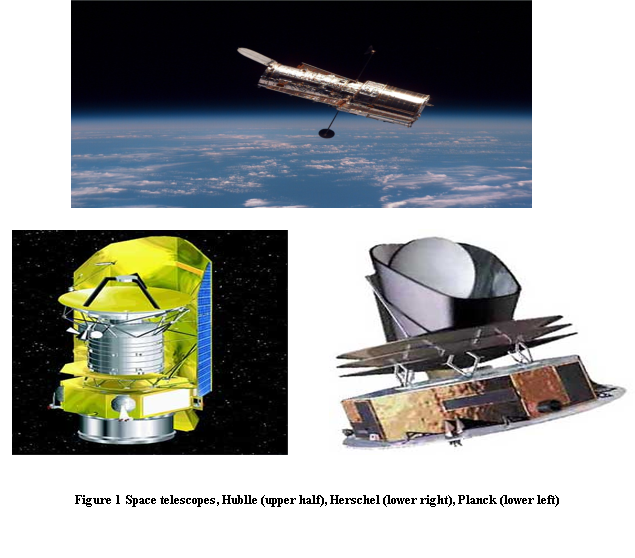 Optical astronomy and radio astronomy had a rapid development in the past few decades, as the advancements in techniques and engineering acted as a catalyst in creating high performance instruments for science.

Developments in space exploration and the improvement in space-qualified hardware allowed astronomy to switch from visible light observations with ground-based telescopes to space telescopes sensitive to Gamma and X rays, ultraviolet, and infrared radiation. In 1990, NASA launched in collaboration with ESA the Hubble Space Telescope (HST) (see Figure 1), one of the most known and versatile space telescopes. The HST does observations in the visible light, ultraviolet and infrared domain. Multiple other telescopes were launched meanwhile, worth mentioning being two of ESA’s most recent missions: the Herschel Space Observatory and the Planck Space Observatory. Both can be seen in Figure 1. They were both launched with the same spacecraft, in May 2009, with the goal to do observation in the far-infrared domain (Herschel) and microwave domain ,respectively, with wavelengths between 0.35 and 10 mm.

The missions provided images of the Universe in different frequency ranges and revealed celestial objects and phenomena undistinguishable in visible light. In Figure 2, it can be seen that by going from infrared observation to microwave domain, the image complexity increases and different entities become observable. These images helped us expand our understanding of the Universe and its components, thus, the motivation for analyzing radio waves of cosmic origin. 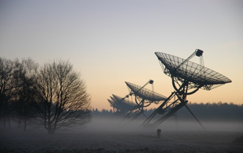 As stated previously, technical developments influenced radio astronomy in a similar manner. Many large dish telescopes and arrays of telescopes were built in order to capture EM waves with wavelengths in the order of centimeters and meters. For higher resolution and for longer waves, arrays of telescopes have been built. See the Westerbork Synthesis Radio Telescope in Figure 3 and LOFAR in Figure 4. However, Earth-based radio astronomy is limited to frequencies above 30 MHz because of the ionosphere’s opacity and RFI. 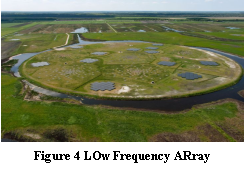 Exploring EM waves in this frequency range poses many difficulties and was practically impossible until now. Higher processing power available nowadays and the development of the small satellites sector opened up opportunities and made the idea of a very low-frequency radio telescope just one research step away.

Ultra-long EM waves are the result of planetary emissions from outside and inside the solar system and of high-energy particle interactions. Exploring this band would create an image of our younger universe and uncover a lot of the so called astronomical dark ages. Many questions concerning Earth, Sun, interplanetary and interstellar medium, and extragalactic universe could find their answers.

Earth-bound astronomy in frequency bands below 30 MHz is practically impossible due to the instability and sometimes complete opaqueness of the ionosphere and the presence of man-made interference. One solution to overcome this is to have a space-based array of satellites that will observe these ultra-long wavelengths, process the information onboard, and then send it to a base station on Earth. The system will consist of a swarm of 50 to 1,000 identical nano-satellites (sensors) spread over

kilometric distances that will orbit faraway from terrestrial radio frequency interference. The distributed solution provides redundancy and robustness as it is insensitive to failure or non-availability of a small fraction of its components. Yet it comes with a few challenges regarding the data flow within the system.

OLFAR – Orbiting Low Frequency Antennas for Radio Astronomy – will be a network of satellites that will create the low-frequency image of the universe by collecting information and processing it by means of interferometric imaging algorithms. In order to generate relevant astronomical data, the satellites will have to gather large amounts of data (exceeding 5 Mbit for every second of observation) and then distribute it to all other swarm members. The high data rates, the number of nodes, and the large distances between nodes, make the communication layer problem very complex. Added to all this, the dynamic character of the system will impose some constraints and make the requirements even harsher.

When dealing with the dynamics of the swarm, two aspects have to be considered. First of all, the satellites will be placed on orbits either around the Sun ­­‑ Lagrangean Points L4 or L5, or around the Moon. These positions were selected to satisfy RFI and fuel efficiency requirements. Secondly, the satellites will also move relative to each other.

Let us take, for example, the case of a Moon orbit as in Figure 6. Eccentric orbiting causes the satellites to have different angular speeds while going through the trajectory. As a result, the swarm distribution will evolve from a compact system (maximum distance ~50 km) to a more dispersed one (maximum distance ~100 km). Unevenness in the gravitational field of the moon will also cause drifts from the ideal path. The average speed of the satellites, relative to the center of the swarm, will be up to a few meters per second. 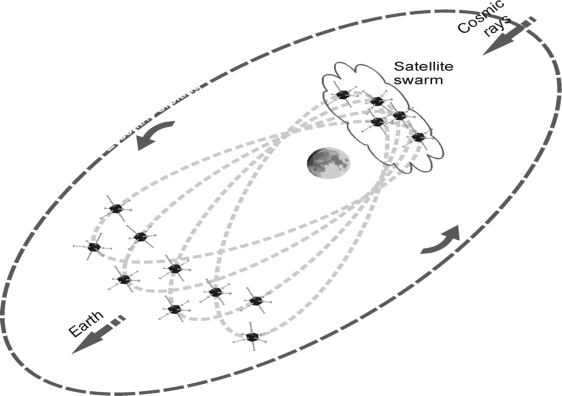 In case we consider a Sun orbit – L4 or L5 – the drift speeds are an order of magnitude lower. However, the changes in the node distribution will still have an impact in its behavior and requirements. Swarm dynamics together with design and functional constraints will result in strict demands for the communication layer. Both the inter-satellite links and the Earth-swarm link will have to provide the necessary throughput to fulfill the radio telescope goal.

The inter-satellite communication must ensure that the imaging process is carried out without flaws. For the distributed correlation it is needed that each satellite shares its astronomical data, position and time, with all its peers. Clustering will be employed to reduce the length of the links and the data distribution efforts. Still, satellites will have to deal with data rates of Mbit/s over distances of tens of kilometers. Suitable modulation and multiple access techniques will be combined with an efficient antenna system to fulfill the demands.

The design of the antenna system is part of Teo Willink’s master final project “Antenna System for OLFAR’s Inter-satellite Communications”.

After collecting and processing the astronomical data, the swarm needs to send the results to a base station on Earth. Although the data rate will be only in the order of hundreds of kbits/s, the length of the swarm-Earth link will be considerably larger than in the previous scenario. Transmitting information over hundreds of thousands of kilometers using only around 10 Watts of power is very challenging. Multiple satellites can be used in this case, as diversity techniques can be employed to improve the parameters of the link.

To conclude, building a low frequency radio telescope in space may seem utopic for many. However, the goal of revealing the Universe’s depths gives us the necessary motivation to overcome all difficulties and to achieve it.