The RoboTeam Twente participated in the RoboCup for the third time: With placing 14th in the first year, 7th in the second year and 5th place this year, RoboTeam Twente is on its way to be established as a top-tier team in the Small Size League.

Starting the tournament with a win against ER-Force, the team was able to show that it had a solid team of robots to start the tournament with.  Then followed three losses against, among others, last and this year’s champions ZJUNlict. The team had issues with the robots crashing into the opponent’s team with too high speed and that resulted into many yellow cards. The team descended into the knock-out round in the lower bracket of the tournament.

With 22 hours to prepare for the next match on Saturday at 4 pm, the mechanical, software, AI and electronics team worked on the flaws detected in the match. RoboTeam Twente went into the match knowing, that if they won the match, they will have passed the previous team’s achievement and that the strategy of the team had worked.

The match against OpAmP from Japan turned out to be a thrilling match with instances of both teams contesting the auto-referee’s decisions. When the match was tied 1:1, the opponent was given a penalty shot that it successfully turned into a goal. However, there was an observation made by a team member of RoboTeam that the opponent’s robot had pushed the ball into the defense area and only then shot the ball, which just like in human football, is prohibited.

After looking at several videos recorded of the match, the referee declared that the penalty had indeed been double-passed and the decision had been revised and declared a ‘no-goal’. After the decision of the referee there were two over-time periods played and RoboTeam’s KAREN robot scored the winning goal. RoboTeam Twente had survived the first knock-out stage and claimed an important win.

The following tournament was played 13 hours later on Sunday morning at 8am against MRL from Iran. The tournament was opened with a goal by the opponent after only 20 seconds. The RoboTeam had to withstand the very tough opponent and there were multiple yellow cards issued on both sides of the team. MRL was better in offense and shot out RoboTeam Twente with 5 goals with the end result being 6:1.

RoboTeam Twente placed 5th in the tournament and can now say that it is a top tier team in the RoboCup 2019. The team placed 2nd in the ranking of Most Improved Team with 16 points after Ultron that had received 18 points and followed by RoboCIn and TIGERSMannheim with 10 points each.  Also, RoboTeam Twente was named as one of five teams that together received a rounded score of 3 and were all together Most Helpful and Fair Teams.

With these acknowledgements and statistics, the RoboTeam Twente is assured to be on the right path after only being founded three years ago. The team is currently evaluating the results of the tournament and is working on the transitioning to the next team. Now begins the delicate transfer of knowledge and experience to the new team that will hopefully be able to continue the success of the University of Twente’s soccer robots. 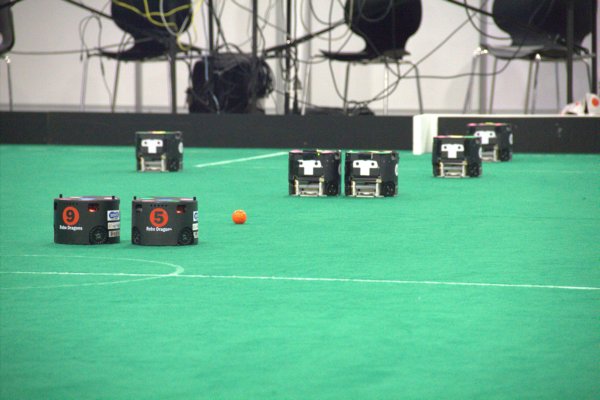