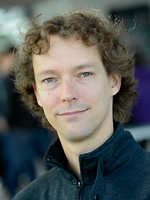 Dennis Reidsma is Assistant Professor at the Human Media Interaction group and Lecturer at the Creative Technology curriculum at the University of Twente.

After obtaining his PhD in 2008 on reliability and validity aspects of large annotated multimodal corpora for machine learning, he worked with dr. Herwin van Welbergen on behaviour generation for coordinated interaction with social agents. Besides a number of high impact publications, this led to the release of AsapRealizer (formerly Elckerlyc), a state-of-the-art Open Source software platform for generating continuous interaction with Virtual Humans, social agents and robots. Currently he uses this platform to investigate the potential impact of social robots in the classroom.

Over the last five years, he also developed a research line on interactive playgrounds for play, care, and learning, through development of, and user experiments with, a number of proof-of-concept prototypes in the lab and in the wild.

H-index according to Google Scholar

Social robots in the classroom

As part of the EU project EASEL, Dennis leads a multidisciplinary team that works on human-robot symbiotic interaction in learning scenarios. Together with this team he looks at behaviour generation for robots in learning, as well as the impact of interactive technology on the learning process and outcome of children in inquiry learning scenarios.

Over the past five years, Dennis worked together with a team of colleagues (most notably Robby van Delden, Ronald Poppe, and Alejandro Moreno) on a research line on “play with impact” through various projects of playful interaction in smart environments (for entertainment, education, and health & wellbeing applications). He has collaborated on the development of a number of interactive play platforms for children’s play, play for people with Profound Intellectual and Multiple Disabilities, play for gait rehabilitation, and other domains. Central theme in these projects is the potential for playful interactive technology to influence the social and physical behaviour and experience of the user.

Dennis Reidsma teaches, and coordinates modules, in the BSc programs Technical Computer Science and Creative Technology program, and plays a role in designing the new MSc program Interaction Technology. In addition, he supervises student projects in the Human Media Interaction MSc curriculum at the University of Twente, and occasionally teaches guest lectures at PhD summer schools. He completed his University Teaching Qualifications in 2015.

Dennis Reidsma was co-editor of the proceedings of ACE 2012 Nepal (and demo chair), ACE 2013 Twente (program chair), INTETAIN 2009 Amsterdam (local chair), and INTETAIN 2014 Chicago (program co-chair), and has served as guest editor for several issues of the journal on Entertainment Computing (Elsevier) and the International Journal on Arts and Technology (Inderscience). He serves as Associate Editor for the Entertainment Computing journal, and reviews regularly for workshops and international conferences such as ICEC, ACE, INTETAIN, ICMI, HBU, Measuring Behavior, IVA, CASA, AAMAS, and many others.

He has been involved in the organization of the following scientific events:

Dennis plays an active role in outreach activities from his research group.

He takes specific care to keep/get students from the various educational programs involved in research, by stimulating them to pursue their own ideas to the point of publishing the results in a peer reviewed paper (leading to more than 10 peer reviewed papers co-authored by students). He organises field trips for primary school children in the DesignLab of the University of Twente (several times a year), where children play with many novel technologies but at the same time contribute to interactive evaluations and the collection experimental data. Furthermore, he organizes "in the wild" and field tests with interactive technology for play and learning together with his PhD students. These tests take place at "semi-public" locations such as Hoogstraat Revalidatie (gait rehabilitation), Dichterbij (care institution for people with PIMD), various schools and daycare centers, and TETEM art gallery, plus simiar activities with BSc and MSc thesis students at, e.g., Concordia Gallery Enschede, Rijksmuseum Twenthe, and Music Therapy sessions at the ArtEZ School of Music.

Finally, he is also part of the “werkveldcommissie” (an advisory body) of the newly created Master Programme in Music Therapy at ArtEZ School of Music in Enschede.

Dennis’ work received quite some exposure in media (especially in the context of the EASEL, COMMIT, and GREAT projects), among which the following selection:

Anemone - Emergent Entertainment
Going out is supposed to be a social experience, but how often do you find yourself standing at the bar, waiting for drinks, surrounded by people that keep their hopeful gaze fixed solely on the bartender? Anemone brings the bar's surface to life, providing entertainment to everyone around it and serving as an ice breaker. Anyone can join in on the interaction, leading to a shared experience.
More information
Interactive Tag Playground
The Interactive Tag Playground (ITP) is an instrumented open space for interactive play. Games are visualised using a floor projection; players control the game by moving around in the space. Game mecahnics are introduced to steer physical and social behavior of players.
More information