A prototype of the smart rainwater buffer is currently operational at the University of Twente. The municipality of Enschede announced earlier that it aims to have smart rainwater buffers located in thousands of gardens in the city and to have companies install mega versions that can accommodate tens of thousands of litres of rainwater. This could mean that the streets of Enschede never flood again.
Enschede is flooded with rainwater in the event of heavy rainfall, despite the enormous sewer system under the city. Rainfall is only expected to increase in the coming years and all that water has to go somewhere. Enschede is therefore investing millions of Euros into rainwater management. The Raintower may revolutionize the way we deal with excess rainfall.

The idea of a smart rainwater barrel arose some two years ago in a Creathon. The University of Twente’s Creative Technology educational programme develops graduation projects with a social impact. And this is a good example.

Richard Bults said earlier, in Tubantia, that discussions with the city council had revealed that “Residents in Enschede regularly have problems with flooding. It occurred to us that it might be possible to use tanks to store rainwater temporarily in times of torrential rainfall. Obvious, you might think. The problem is, of course, that rainwater tanks are often full just when you need the storage capacity, i.e. when it rains. Therefore, we asked ourselves whether we could come up with a system to ensure that rainwater tanks are empty when it rains and full when we need water.”

On the day of the water authority elections, Richard Bults is at DeLaval, a large supplier of dairy farmers’ requisites. The company offers a milk tank with a volume of no less than 30,000 litres that will serve as a prototype; a gigantic rainwater buffer. Bults: “We would ultimately like to install this tank as a smart rainwater buffer on our campus. We can do a lot with the collected rainwater; for example, use it as a water supply for the green areas and trees on the university’s campus. We hope that in the near future a lot of large organizations and industries install a rain buffer like this.” 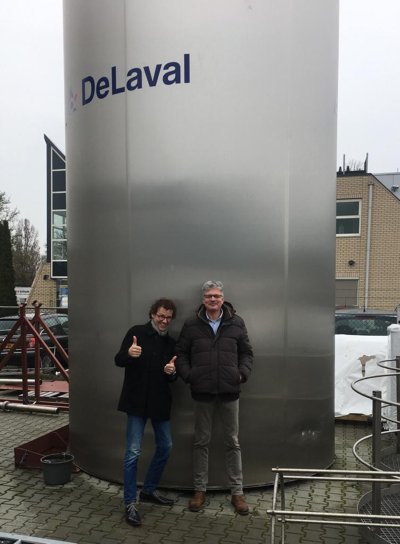 The Raintower project will be financed by the rioolfonds (sewer fund) and will also be sponsored by the Vechtstromen Water Board. The first smart rainwater buffers are currently tested by a handful of experts. The feedback received will be incorporated into an improved version. This improved version will be installed in the gardens of 24 residents of Enschede to test ‘ordinary’ use.