Gabi Kaffka (Utrecht University School of Economics) has won the Best Empirical Paper Award from the Academy of Management. She won the award in the Entrepreneurship Division. 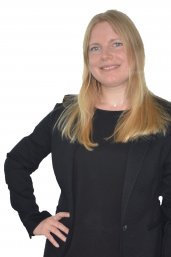 Together with co-authors Raja Singaram (DePaul University, Chicago) and Jeroen Kraaijenbrink (University of Amsterdam), Kaffka wrote about how stakeholders influence starting entrepreneurs with negative feedback (sensebreaking). Entrepreneurial cognitive development is based on novel sensemaking processes that are triggered by sensebreaking mechanisms. Sensebreaking creates a meaning void by disrupting current sensemaking of individuals.

Over a period of one year the researchers followed thirty entrepreneurs engaged in new venture creation. Applying the concept of sensebreaking, they analyzed the influence of crucial stakeholders on their entrepreneurial cognition using a real-time, longitudinal data set of weekly diary entries. The examination of 7,200 distinct units of analysis revealed 115 sensebreaking instances. Kaffka: "We show how sensebreaking initiated by specific stakeholders aids novel sensemaking via three possible mechanisms: questioning, reframing and redirecting."

"With this research, we shed new light on entrepreneurial opportunity developed in concert with stakeholders during the early stages of a new venture." Gabi Kaffka Utrecht University School of Economics

The paper contributes to the micro-level foundations of entrepreneurial cognition, empirically demonstrating that it is socially situated. "We shed new light on entrepreneurial opportunity developed in concert with stakeholders during the early stages of a new venture," says Kaffka. "I am very happy with the appreciation coming from 'my' field of research and it motivates me to continue this research."

The award is presented during the annual Academy of Management conference in August, which will take place online this year.