The ceremony took place during the 45th anniversary of the University of Twente. 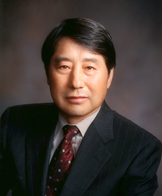 Sung Wan Kim received his honorary doctorate in his function as "Distinguished Professor" in both pharmacy and pharmaceutical chemistry, as well as in biomedical engineering. He was Director of the Center for Controlled Drug Delivery at the University of Utah from 1985 to 2006. His research focuses on polymers that can be used for the highly controlled delivery of drugs to the proper place. Professor Kim has many awards to his name and is a member of two of the three prestigious National Academies of Science in the U.S. The UT Institute BMTI has been working closely with him for years, in an exchange programme for PhD students. Kim was nominated by the scientific director of the institute, Professor Jan Feijen. 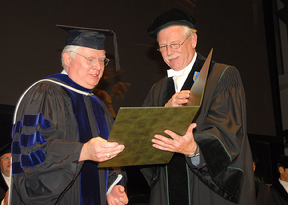 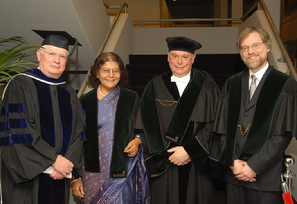 Professor Sung Wan Kim earned his his bachelor's and master's degrees from Seoul National University. In 1969, he received his Ph.D. in physical chemistry from the University of Utah. Kim is a pioneer in his field. Since 1974, he has been engaged in research on controlled drug delivery in the field of hydrogels, biodegradable drug conjugates, self-regulating drugs and stimuli-sensitive polymers. Kim's current research includes the design of new polymers for the delivery of protein drugs, cells and genes. During his career, Kim has been presented with several awards.

Kim about the honorary doctorate:

"It was a great honor for me to receive the honorary doctorate from the University of Twente. I have had a long association with the University. As early as 1974, I began a research collaboration with Prof. Jan Feijen. In addition, I have also worked a great deal with Prof. Engbersen. We have mutually exchanged many students, I guess a total of about 25. Our research focuses on biomaterials, and the development of new therapeutic opportunities for using them. This is a very important area of ​research".

"To young talents, I would recommend: Get interested in new ideas and concepts. Always challenge yourself and don't be frightened."