On 29 November 1996, Marten Oosting, MA was awarded an honorary doctorate from the University of Twente.

This is because of his significance to the science of public administration in general and to the Department of Public Administration of the UT, in particular. 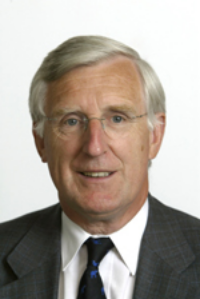 Marten Oosting, born in 1943, was the National Ombudsman from 1987 to 1999. The university praises the Jurisprudence of Precision developed by Oosting. With this, he provided a scientific basis for the institution of Ombudsman, according to the UT. In addition, the UT expressed its appreciation for his national significance as National Ombudsman. Oosting: "I received the notice in a letter from the then rector Popma, on April 29, 1996 about the decision of the Council of Deans to nominate me for an honorary degree. An honorary doctorate is awarded "for outstanding merits," as the rector wrote. In my case, they considered my significance for the science of public administration in general and the Department of Public Administration of the University of Twente, in particular, and my national significance as National Ombudsman. Honorary supervisor, Professor Rider, pointed this out, in his speech given at the presentation of the method I developed as National Ombudsman for objectively testing the propriety of government conduct." 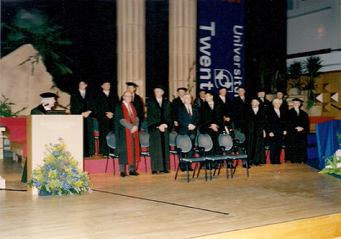 Include the four honorary doctors and their promoters during the ceremony

After several years of military service, Marten Oosting was appointed lecturer at the University of Twente, then Technical University of Twente. Oosting: "From 1 May 1970 to 1 February 1978, I worked as a senior lecturer at what was then the THT. I was, at that time, directly involved -- with respect to both the content and the organisation -- in the preparations and the establishment of the Department of Public Administration. This was the first full university degree course in public administration in our country and it was launched in 1976. Thus, I was Secretary of the Preparatory Committee and then the provisional board of the former subdepartment of Public Administration. Both of these were chaired by former rector Prof. P. J. Zandbergen. Subsequently, I was Dean of Education in the first board, until my departure to the University of Groningen. From 1970 - 1974, we lived on campus (Reelaan). From 1993 - 2001, I was chairman of the Dutch Research School for Public Administration, whose lead agency status was then in Twente." Oosting continued his career as a lecturer and professor at the University of Groningen. On 1 October 1987 he was appointed National Ombudsman. As ombudsman, he regularly sought publicity, including via a column in De Telegraaf. In this way, he familiarized a wide audience with his work. After his departure as Ombudsman, he became a member of the Council of State, a position he held from 2000 until his retirement in 2013. 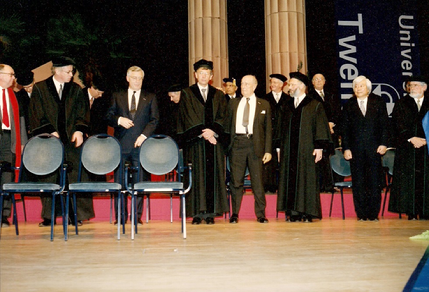 The honorary doctors in a row during the ceremony

Oosting on the honorary doctorate:

The decision of the UT came as a total surprise to Oosting. "As the name, 'honorary' says: I truly considered this honorary doctorate to be an exceptional honour. I was affected by this award because of my relationship with the UT and because, for the first time, someone was nominated from the field of public administration. But also because this is such a special form of recognition for my pioneering work as National Ombudsman. The honorary doctorate has reconfirmed my bond with the UT. After my resignation as chairman of the school of research , I had no new collaboration with UT, my work as a member of the Council of State gave no reason to do so. However, my bond with Enschede was also reconfirmed by my chairmanship of the Committee of Inquiry on the fireworks disaster." 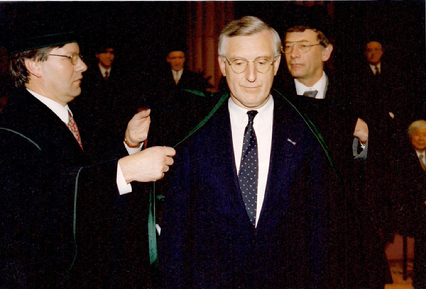 "I recently retired and have had the privilege during my working life to be able to change a number of times to what was always an interesting new job and a new work environment. In my double scientific training, I placed the focus on public administration. When, in 1970, after my military service, I joined the then THT, it was because I had heard of plans in Twente to start what would be, in our country, a new course of study in public administration; I felt that I wanted to take part in that project. University of Groningen, National Ombudsman, State Council; they were always new opportunities and I was lucky to have been given them. With every new challenge, of course, the experience gained in previous positions were useful for the new job. Thus, it is indeed a lifelong learning experience. Against the background of these experiences, I can only recommend to those who are still at the beginning of their careers to use all their talents, creativity and energy for what they are doing at any given moment, but also not to hesitate to seize opportunities that arise to start new phases in their careers. You can sometimes lend chance a hand."