On 25 November 2011 Professor Helga Nowotny received an honorary doctorate on behalf of the University of Twente.

Nowotny is Professor Emerita of Social Studies of Science at ETH Zurich (Swiss Federal Institute of Technology) and President of the European Research Council (ERC). 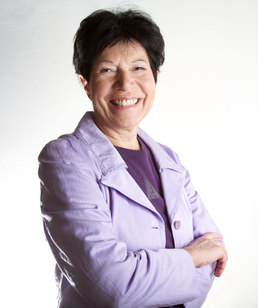 Nowotny has conducted extensive research on the shaping of social, ethical and political aspects of science and technology. In her concept "Mode 2 Society', science has greater interaction with society, and in new ways, than was previously the case. 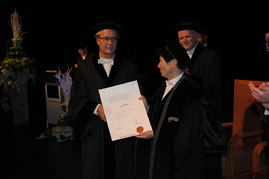 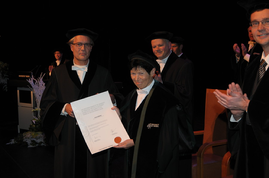 Presentation of the honorary doctorate to Helga Nowotny

Helga Nowotny is Professor Emerita of Social Studies of Science at ETH Zurich. She is a founding member of the European ResearchCouncil (ERC) and since 2010 its President. Helga Nowotny has a PhD in Sociology from Columbia University, New York and a doctorate in law from the University of Vienna. Her current host institute is the Vienna Science and Technology Fund (WWTF). In addition to her scientific work, Professor Nowotny has taken part, and continues to do so, in sessions of scientific advisory boards in several European countries. Among her many activities, she has served as chair of the European Advisory Board of the European Commission (EURAB) from 2001 to 2005. She is a member of the Scientific Advisory Board of the Ludwig Maximillians University in Munich as well as a member of many other international advisory bodies and selection committees. She is also a foreign member of the Royal Swedish Academy of Sciences and a long time member of the Academia Europaea.

Nowotny has published numerous articles and books, including "Insatiable Curiosity. Innovation in a fragile future". Her most recent publication, together with Giuseppe Testa, is "Naked Genes: Reinventing the human in the molecular age". She has published over 300 articles in academic journals and has received many awards and honours throughout her career. 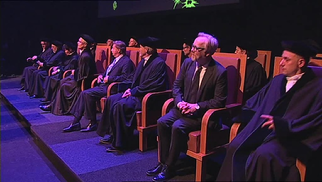 The honorary doctors with their promoters in a row

Nowotny on receiving the honorary doctorate

“Of course I was very honoured when I heard that I would be awarded an honorary doctorate from the University of Twente. With the establishment of 'Steps' (Department of Science, Technology and Policy Studies), Twente was one of the first universities in Europe with such a centre. Science Technology and Society (STS) is the field that I helped to create and the field in which I have contributed most of my work over the past twenty-five years. Professor Arie Rip, the spiritus rector of the department, is a good friend and colleague. I admire him for his vital contribution to STS. Professor Stephan Kuhlmann is a worthy successor and now the head of this department; he delivered the laudatio during the presentation of the honorary doctorate. I have visited the University of Twente many times over the past years and I have made many friends, also outside STS. I have collaborated extensively with Professor Rip and other staff from the department, and I hope that this fruitful collaboration will continue. Naturally, accepting an honorary doctorate from a university like Twente makes me even more interested in the future of this institution." 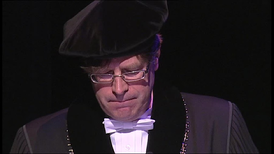 "I think that the University of Twente is an excellent place in which to study. The UT provides great facilities for doing research, not only in STS but also in the other technological and social sciences that the university maintains. Every time I visit the Twente campus, the intellectual spirit I encounter impresses me. And I hope you enjoy this spirit, too!”