On Friday 1 December 2006 NASA computer scientist Dr Gerard Holzmann was awarded an honorary doctorate by the University of Twente for his pioneering work on reliable software. 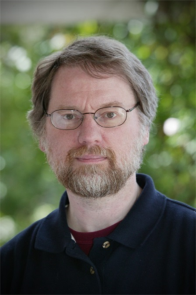 Holzmann developed SPIN, a product that checks software reliability, which is being used by tens of thousands people throughout the world. “Many critical applications – for the control of telephone exchanges and space ships, for instance – consist of multithreaded systems nowadays. These systems are so complex that you can’t guarantee their reliability by testing them or studying them carefully. So what you need is a different kind of tool, such as SPIN. The great strength of SPIN is that programmers do not need to know all the theory it incorporates to use it as a tool.”

Holzmann gained his PhD in 1979 as a computer scientist in Delft. Between 1980 and 2003 he was a member of Bell Labs’ Computing Science Research Group, which developed the Unix operating system and the programming languages C and C++, among other things. Holzmann worked on the SPIN model checker for fifteen years and for it won the Software System Award of the American Association for Computing Machinery in April 2002. Since 2003 he has been working on improving the reliability of software for space ships at NASA’s Jet Propulsion Laboratory. 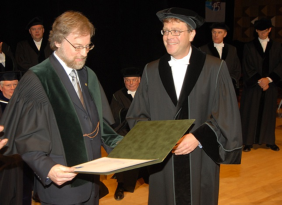 The presentation of the honorary doctorate

Holzmann on his honorary doctorate

“When I heard that I was to be awarded an honorary doctorate I was surprised and very pleased. I’ve known Prof. Ed Brinksma as a fellow researcher since the mid-1980s. I have great admiration and respect for the work that he and his group have done at the University of Twente. They’ve had many successes over a long period of time. The Formal Methods and Tools Group in Twente has undoubtedly been one of the leading research groups in the world in this field for decades. I enjoy working together with them enormously, also the friendly competition between our groups. The honorary doctorate has further strengthened the ties between our groups, as well as the mutual respect we have for each other’s work.” 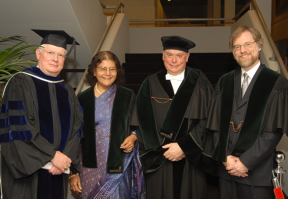 Gerard Holzmann and the other honorary doctors

Advice to young scientists or students

“Find a problem to work on that excites you and is important – so important that even a partial solution could make a difference to people’s lives. Why, for example, do we still not know how to write a software application that is completely reliable, an application that the software supplier can guarantee to be error-free? Solving this problem is very important and necessary, so why haven’t we found the solution yet? What I would also like to say is this: think about things that matter, work on problems that are important, and don’t forget to enjoy your work!”