Recently, on 10 September, Dr. Eric Louis of the XUV group at Twente celebrated his last working day of a memorable and respectful career in XUV optics. The event was held in a Corona-restrictive setting, in no way doing justice to the importance of the professional achievement. The sober room accommodated the 1,5m-maximum of a dozen colleagues, with another twenty attending via a video-link. The event formed a contrast to the glorious stature of Eric’s career.

Ever since the start of Eric’s XUV work, in 1988 at the FOM-Institute Rijnhuizen, the quality label of his work was of the highest grade. Results on reflectivity of the multilayered optics were world records, precision of the film control and deposition astonished even the most critical party involved, and the analysis of the data was robust down to picometer accuracy. It set the landmark of Extreme UV Lithography, having giant, high-tech industry players like ASML and Zeiss embark on the further development of this challenging technology. Eric’s highlights included a prime role in the first 13nm-printed microstructures in Europe, using a laser plasma light source, and the deposition of the so-called Alpha Demo Tool optics, the first industrial proto-type lithography scanner using 13nm light.

Over the 32 years of Eric’s professional life on thin film and multilayer physics, all of the measurements, papers, conference presentations and theses showed Eric’s signature of quality. The move to Twente, initiated in 2012, in many ways preluded a harvest phase of research results and the growing team managed to maintain that standard. An indispensable factor of that success was Eric’s social skill to interconnect the team members, internally at FOM and Twente, and externally, at Zeiss, ASML, and the numerous academic partners. This ensured an effective collaboration and a pleasant and productive working environment. Not only did it contribute to the overall success of EUVL, it also supported a unique valorization of physics research results into an industrial high tech development in the Netherlands.

The XUV optics and litho communities owe Eric a lot! 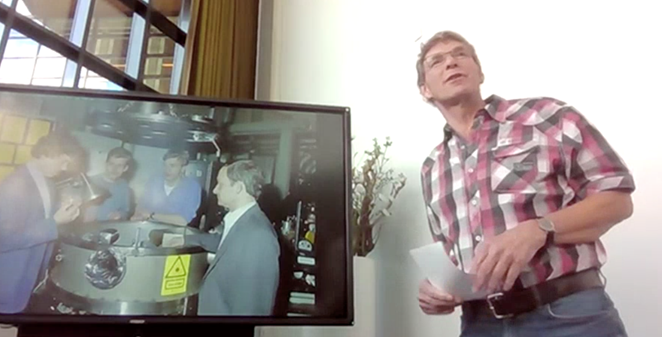