Social robots with negotiating qualities. A ‘dedicated’ glass fiber connection between Twente and Münster for testing quantum secure data transport between both universities and cities. Using vibrating socks to take away movement blocks of Parkinson patients. These are three very different, but all highly relevant, research projects that received a so-called Strategic Collaboration Grant of the Universities of Twente (UT) and Münster (WWU). Out of six pitches, the jury selected these three projects. In total, fifteen proposals were submitted.

For some years now, the University of Twente and the University of Münster (WWU) annually issue the Strategic Collaboration Grant. It is  an amount of 80,000 euro: modest in size, but with the potential of functioning as an incentive for further collaboration. It is all about exploring where both universities, at only an hour drive from each other, are complementary and find ways of structural collaboration. The strategic grants often are the first step to a larger research proposal, for example in a European consortium. Over the past years, it also led to joint Professor appointments, for example. In the latest round, both UT Rector Tom Veldkamp and his WWU colleague Johannes Wessels were impressed by the quality of the proposals. Three of the fifteen were selected on Friday 28 January. 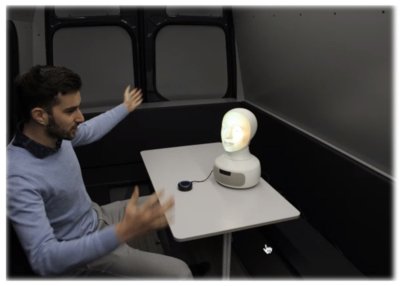 In this project, the researchers aim at understanding how technology, like social robotics, can play a role in employment negotiations, in the last phase of recruitment for example. In what way can both the future employee and the organization benefit from this? Apart from this, they are interested in using robots for building trust, in a controlled setting like the on-campus BMS Lab and the mobile ExperiVan lab of the University of Twente. Repeating the same interaction experiment with people, the contact – and possibly the outcome – will never be identical. Introducing a robot, this may change. Social robots are already used in several large organisations, for example in training ‘bad news interviews’.

Data transport can be secured in several ways. Quantum Key Distribution is one of the very secure options. This is usually tested in a lab, with short send/receive connections. It is exciting to test if the security also works in an intercity setting. The partners therefore want to build a dedicated glass fiber Twente-Münster connection for sending and receiving the quantum key. Will they be able to realize a ‘one photon’ security key, what about the losses along the way, will it work over long distances? The University of Twente has several new initiatives in the field of quantum computing and communication, while Münster develops high-quality ‘single photon’ sources.

Patients suffering from Parkinson’s disease, can all of a sudden ‘freeze’ when walking. They suddenly stop moving and seem glued to the ground. This can, subsequently, lead to falling and cause injuries. There are some techniques stimulating the patient to keep moving, based on ‘cueing’. One of them is using socks that can vibrate. The Twente and Münster researchers now would like to do research on patients’ experiences with these socks, even if they have to perform a second task next to keep moving, like keeping balance on a slope. This will be tested in a safe and controlled VR environment. The pilot study, made possible by this grant, should lead to a field study for about 25 patients, aiming at technology that can be commercially introduced in a safe way.