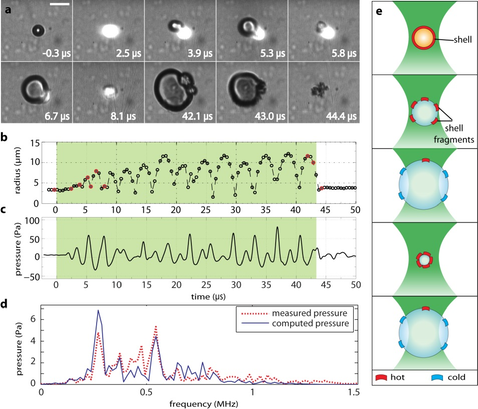 A collaboration between BMPI and the Physics of Fluids (POF) at the University of Twente, and with Philips Research and Erasmus Medical Center, has resulted in a paper published in the prestigious journal Nature Communications.

In this work Guillaume Lajoinie and colleagues studied the behavior of micron sized gas- and oil-filled capsules when illuminated with laser light. The microcapsule walls contain a dye, which absorbs the incident light. The heating causes vaporization of the embedding water resulting in bubble formation and subsequent collapse. Details of the initiation and dynamics of the bubbles were followed using a coupled acoustic and optical measurement system. The optical system is the well-known Brandaris camera of the group of Prof. Michel Versluis at the POF. This allows a microscopic monitoring of bubble dynamics at upto 25 million frames per second.

The ability to measure at ultrashort (nanosecond) time scales showed unprecedented behaviors of the bubbles. One exceptional finding was that CW radiation can result, in the right conditions of laser light focusing and capsule size, an oscillatory behavior in bubble growth and regression. Explanations were put forward for this phenomenon. Strong modelling using analytical and computational methods showed good agreement between the modelled bubble dynamics and experimental results.

This work is of importance since precision control of vaporization, both spatially and temporally, has many potential applications.

The details of the paper are: