A quantum processor working with light, photons, developed at the University of Twente, becomes an ever stronger ‘toolbox’ for doing quantum experiments. The latest version not only has more inputs and outputs, it can also be fed by a photon source that is able to produce identical photons. Physical experiments, sometimes counterintuitive ones, are now possible. Can a system, for example, show quantummechanic and thermodynamic behavior at the same time? Reinier van der Meer defends his PhD thesis on this, on 24 February.

It all starts with the source, if you want to perform quantum calculations using light. The photons you would like to use, have to be as identical as possible. Aren’t they identical, then typical quantum properties, like entanglement and superposition, will not be possible. Is one photon, for example, of a slightly different color than the other, the risk exists that quantum properties will not come forward and calculations are not possible. In his thesis, Van der Meer presents a three photon source based on titanylphosphate (KTP) that can, in its current version, be upgraded to 11 photons that are very identical. 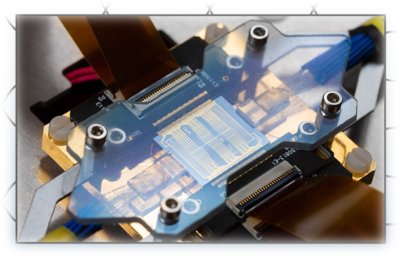 The next step, the processor Van der Meer did his experiments on, is a system with 12 inputs and 12 outputs. In between, there is a system of light-conducting channels, made of silicon nitride that is known for its extremely low losses. The first processor of this type had 8 inputs and 8 outputs, and in fact it was by coincidence (‘serendipity’) that the photonic circuit could be used for quantum experiments.

The photons move through the channels, with many channel splitters. These ‘switches’ can be controlled from the outside, by local heating. By doing so, a photon can be sent from one mode to another, but also somewhere in between, following the typical quantum phenomenon of superposition. The advantage of this processor is that it works at room temperature, as well as the photons. The advantage is that the photon ‘quantum bits’ are more robust and less noisy than their superconducting counterparts. Measurements at the 12 outputs shows what has happened in all channels along the way.

Where does the information go?

Thanks to the better photon source and larger processor, Van der Meer was able to conduct a few example experiments. One of them is about retention of information. Quantum mechanics is a theory that stays the same in terms of information: through time, two systems will not look more similar. Thermodynamics, however is a theory losing information: two systems will, in time, look more and more similar. Quantum mechanics and thermodynamics can’t be true at the same time, you would say. Still, a system that shows quantummechanic behavior as a whole, can have thermodynamic subsystems. So, there must be a way for information to escape within the larger system.

Reinier van der Meer did his research within the Adaptive Quantum Optics group and the Centre for Quantum Nanotechnology Twente (QUANT), both part of UT's MESA+ Institute for Nanotechnology

The further development of the photonic quantum processor is done by the UT spinoff company Quix Quantum. This company already sold a number of processors to research groups in the world, it helps them to gain experience with these fully new ways of doing experiments. 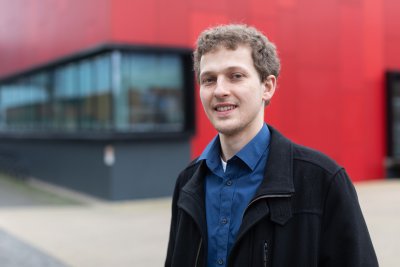