Twente researchers have -in cooperation with scientists from ARCNL- investigated the imaging capacities of special kind of optical fibers with a round core.

Endoscopes have revolutionized many medical treatments. They allow minimal-invasive inspection, requiring only a small hole in tissue. Scientists hope to miniaturize them even further, allowing endoscopes to peek even in small blood vessels, for instance. A promising method would be to use so-called “multimode” fibers, a flexible piece of solid glass that guides light through its core. Such fibers can be used as a thin and flexible probe. Unfortunately, the perturbation of the light channeled through such a multimode fiber makes it difficult to reconstruct an image that is transmitted through the fiber. One way to undo these perturbations is by the technique of wavefront shaping, discovered now more than a decade ago by colleagues from Twente. The Twente researchers now show that one can actually improve significantly on the technique of wavefront shaping through a fiber by not using standard round-core fibers, but square-core fibers. The way light reflects inside such a fiber yields a much more homogeneous output, allowing to scan an undistorted spot of light over the full core area at the output of the fiber, as used often in microscopy.

“The more homogeneous output of a square-core fiber was already known to astronomers” Pepijn Pinkse, leader of the Twente team, explains. He was also surprised how striking the improvement was. “Contrary to intuition, for fiber imaging, square is simply better than round.” 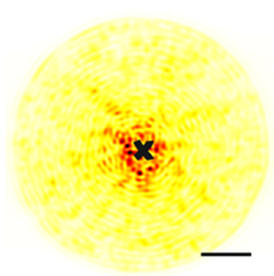 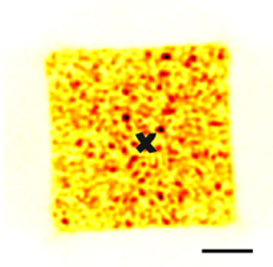 Figure caption: Speckled images at the output of a round-core and a square-core multimode fiber where light is input roughly at the location of the black cross at the input of the fiber. The intensity is much more homogeneously spread over the square core (right) than over the round core (left), allowing imaging with fewer distortion. The scale bars are 20 μm.