Could photons, light particles, really condense and how will this ‘liquid light’ behave then? Condensed light is an example of a ‘Bose-Einstein condensate’: the theory has been there for 100 years, but University of Twente researchers now demonstrate the effect even at room temperature. For this, they created a microsize mirror with channels in which photons actually ‘flow’ like a liquid. In these channels, the photons try to stay together as group by choosing the path that leads to the lowest losses and thus, in a way, demonstrate ‘social behaviour’. The results are published in Nature Communications.

A Bose-Einstein condensate (BEC) is typically a sort of wave in which the separate particles can not be seen anymore: there is a wave of matter, a superfluid that typically is formed at temperatures close to absolute zero. Helium, for example, becomes a ‘superfluid’ at those temperatures, with remarkable properties. The phenomenon was predicted by Albert Einstein almost 100 years ago, based on the work of Satyendra Nath Bose – so it is called after both of them. One of the types of elementary particles, bosons, that will be able to form a Boson-Einstein condensate is the photon, the light particle. UT researcher Jan Klärs and his team developed a mirror structure with channels in it. Light, travelling through the channels, behaves like a super fluid and also moves in a preferred direction. Extremely low temperatures are not required in this case. It works at room temperature. 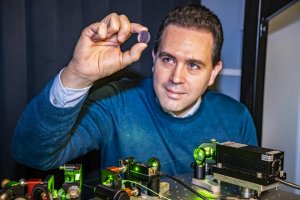 The structure is the well-known ‘Mach-Zehnder interferometer’, in which a channel splits in two channels, and then rejoins again. In such interferometers, usually the wave nature of photons is shown, where a photon can be in both channels at the same time. At the reunification point there are now two options: the light can either take a channel with a closed end or a channel with an open end.  Jan Klärs and his team found that the liquid has the ability to ‘decide’ for itself which path to take by adjusting its frequency of oscillation. In this case, the photons try to stay together by choosing the path that leads to the lowest losses – the channel with the closed end. You could call it ‘social behaviour’, according to researcher Klärs. Other types of bosons, like fermions, prefer staying separate. 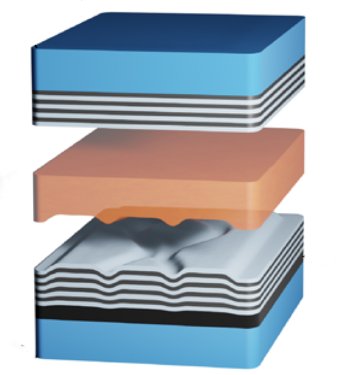 The mirror structure, in a way, resembles that of a laser, in which light is reflected back and forth between two mirrors. The major difference is in the extremely high reflection of the mirrors: 99,9985 percent. This value is so high that photons hardly get the chance to escape, they will be absorbed again. It is in this stadium the photon gas starts taking the same temperature as room temperature, by thermalization. Technically speaking, it then resembles the radiation of a black body: radiation is in equilibrium with matter. This ‘thermalization’ is the crucial difference between a normal laser and a Bose-Einstein condensate of photons.

In superconductive devices as well, at which the electrical resistance turns to zero, Bose-Einstein condensates play a major role. The photonic microstructures now presented could be used as basic units in a system that solves mathematical problems like the ‘travelling salesman’ problem. But first of all, the paper shows insight in yet another remarkable property of light.

The research has been done in the Adaptive Quantum Optics group, part of the MESA+ Institute of the University of Twente.